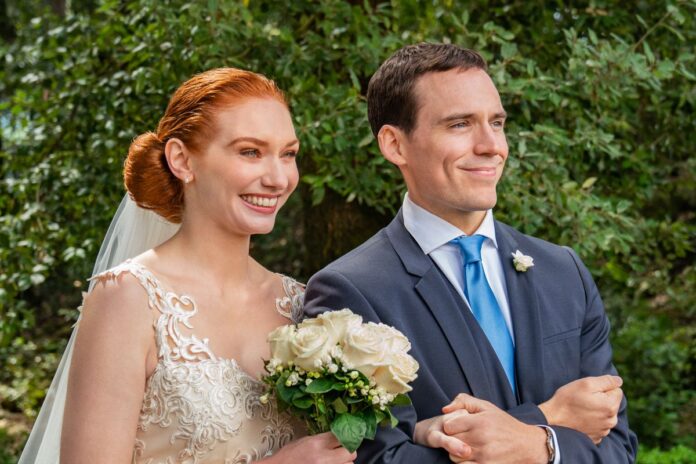 There are some Netflix films that are prestigious, gaining festival and Oscar attention, like The Irishman, Marriage Story, or The Two Popes. There are some fan favorites like Always Be My Maybe or To All The Boys I’ve Loved  Before. However, for the most part, Netflix has a reputation for producing movies that star big names that wouldn’t really work in the traditional theater setting. Love. Wedding. Repeat, Netflix’s newest rom-com and the newest film from Death At A Funeral writer Dean Craig definitely fits that description. From unsympathetic characters to slightly cringy scenarios, at times the only thing working for this film is the beautiful Italian villa where it was filmed.

It’s Hayley’s  (Eleanor Tomlinson) wedding day and just like fate can bring everyone together, it also has the potential to tear everything apart. Walking her down the aisle is her older brother Jack (Sam Claflin,) who has to juggle brother-of-the-bride duties, his ex-girlfriend and the one who got away all at the same wedding. When she realizes her old school mate Marc (Jack Farthing) is about to crash and ruin her day, she asks her brother to put some sleep medication in Marc’s drink. Of course, the drinks get mixed up at the table and when the wrong person ingests the sleep aid and havoc ensues. What follows is 100 minutes of forced farce, a mishandled use of fate, and unfunny and cringy plot points.

Leading the cast are Sam Claflin and Olivia Munn who are not really known for their leading comedic roles. Munn shone brightly as the fast-talking economist Sloane Sabbith in Newsroom and Claflin has had a few one-liners in a few films such as The Hunger Games Franchise but as Dina and Jack they kind of fall flat. Claflin can’t seem to hit the comedic beats to seem endearing and Munn just seems bored the entire time. Frieda Pinto plays Jack’s vapid ex who was invited to the wedding but we’re not quite sure why. Though the role is a turn from the normal dramatic roles Pinto has played in the past, she fails to find the comedy in her character. Irish comedian Aisling Bea (Living With Yourself) tries to bring the charm as wedding guest Rebecca, giving the audience a reprieve from a tedious viewing experience, but it’s not enough to salvage the film.

Halfway through, the film employs a narrative device that starts the story over, switching up the fates of the characters. It comes out of nowhere, feels unneeded and doesn’t do anything to enhance the character development or comedy in the film. Maybe if it happened earlier, maybe if everything played out more than once instead of montaged together super-fast, the film would have more of a leg to stand on. Too many characters and subplots work against retelling the story, making the audience have a harder time connecting to the characters in a limited time frame.

If you want to watch pretty people run around a gorgeous Italian villa and can completely turn off the logical part of your brain, this is the film for you. If you need a sweet romantic comedy to curl up on the couch during quarantine, there are so many more films to enjoy on Netflix.