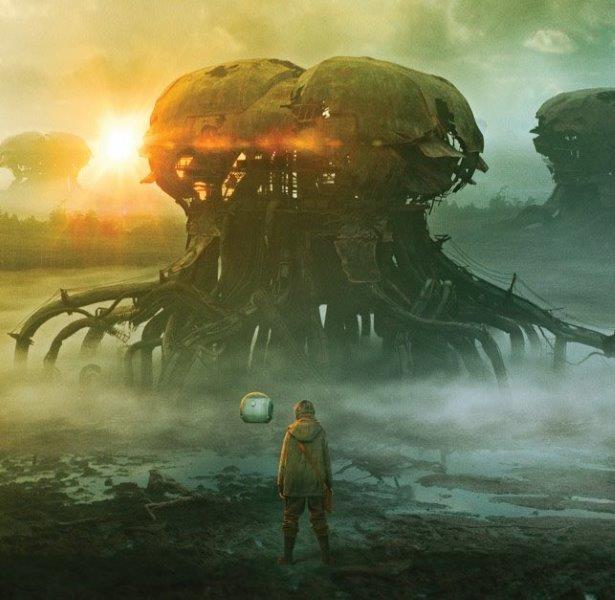 The majority of post-apocalyptic movies adhere to a set structure. The world is in a dreadful state as the survivors struggle to just survive and do the things that those of us take for granted. Something terrible has occurred to the globe. The uber-rich ensure they (and only they) remain on top while everyone else lives in misery under these new socioeconomic paradigms, which is kind of like our society right now turned up to an 11. In Vesper, the newest film from filmmakers Kristina Buozyte and Bruno Samper, find a way to creatively update the genre through stunning visuals and amazing world-building.

I must first criticize Vesper for beginning the movie with a text crawl outlining how the world came to be what it is, instead of showing us. It might be because this is an independent film, so it probably didn’t have as much money to show all that happened, but it feels hollow to start the movie by giving the viewer the cliff notes. It’s like watching a TV show for the first time in the fourth season and then having to play catch up. After scientists attempted to employ genetic experiments to help solve the world’s issues, our world has come to an end. As a result, most of our livestock and most people have died off. Those without access to wealth must use all available methods to get by each day. There, we first meet Vesper (Raffiella Chapman), the 14-year-old girl for whom the movie takes her name.

Vesper and many of the less fortunate people in this society, where nothing actually grows anymore, must make do with what they have and a little creativity in order to survive. Vesper must take care of her ailing father Darius (Richard Brake), who depends on electricity and machine power to survive, as well as deal with the grief of a mother who abandoned both of them. She has the option of giving blood to Jonas (the incomparable Eddie Marsan), who oversees a strange blood and sex cult in their neighborhood, but she has no desire in becoming one of his “breeders,” so she must find alternative means of supporting her father and surviving. Vesper has mastered bio-hacking all on her own. She has reverse-engineered numerous plant-based lifeforms and objects to be able to use them for her daily requirements. She thus spends most of her time trekking across the wilderness with her drone that’s connected to her father (also voiced by Richard Brake), as a robot companion.

Kudos to Vesper’s directors and visual effects teams for their achievement in creating an immersive and stunning planet that has gotten overrun by flora that is totally different from our own reality. Plants can essentially eat you alive in this film. Don’t take a nap outside because you could get picked off by the local plants as if they were coyotes, however, it’s not as risky as Audrey II in Little Shop of Horrors. Every time a dead body is discovered, the nearby plant life begins to eat its flesh. Once again, don’t go to sleep outside, despite the fact that Vesper may view them as an inconvenience that can be ignored. Even the introduction of something so little aids in establishing the world-building of Vesper and aids the audience in being orientated in a novel environment.

When our heroine encounters Camellia (Rosy McEwen), who has mysteriously departed the cozy embrace of “The Citadel,” things seem to alter for our Vesper. She longs to be a part of the wealthy class with their own artificial humanoid servants known as “jugs,” which are notorious for hoarding its resources. Vesper initially views Camellia as a way to enter The Citadel so she may obtain some tools to aid her father and stop worrying about where she will receive her next meal. But she and Camellia quickly develop a friendship and a close relationship. When compared to her existing existence, the prospect of one that is more cozy and welcoming is highly alluring.

But does Camellia really want to be at The Citadel, though? She most likely crashed on the outside, away from The Citadel, for a good reason. Vesper, although savvy and sophisticated, is still a 14-year-old child and has no idea how grownups deal with all of their dark desires. A good illustration of how people behave in a society similar to the post-apocalyptic Walking Dead, where those without anything will kill and struggle for the opportunity to acquire it, is her uncle’s blood and sex cult. She and Camellia are eternally altered as a result of how they deal with their new circumstances.

Vesper is a highly daring and compelling movie, as already mentioned. Even though it has a limited budget and is an independent film, it never ever feels “cheap.” Incredible visual and practical effects work together to engage the audience. This is partly because the directors take lemons and turn them into lemonade cocktails. It’s no minor achievement that there are many scenes in the movie that thoroughly immerse the viewer in the constructed world. Again, the only real issue with the movie is that, despite being almost two hours long, it feels like they just threw us right into the second act. Instead of getting a text crawl describing the new world and its laws, it would have been more exciting to observe this world start to fall from the outset. It is an outstanding sci-fi/coming-of-age tale, nevertheless, about a young girl who must fight for survival.

Vesper is currently in theaters and On Demand.