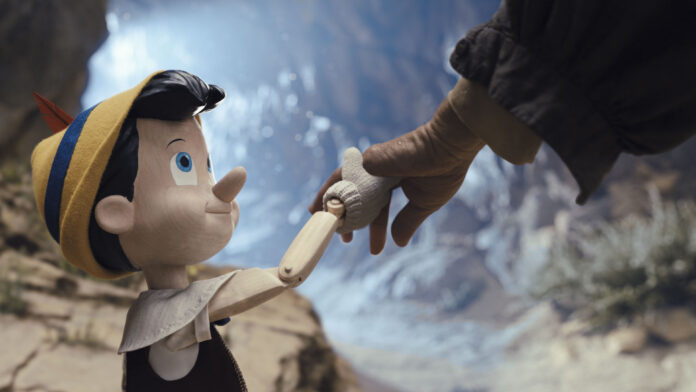 When you wish upon a remake. Makes no difference how bland and fake. It was inevitable that Disney would get around to remaking their 1940 animated classic, Pinocchio, about the wooden marionette who dreams of becoming a real, flesh and blood boy. But there’s no blood that courses through the veins of this lifeless effort from director Robert Zemeckis, yet another CGI-heavy nightmare in a long line of them from the once-great filmmaker. With Guillermo Del Toro soon to offer his own version that we know will lean into the original story’s macabre elements, Zemeckis’ version is as floppy as a pair of donkey ears.

A reunion of The Polar Express team of Zemeckis and Tom Hanks, the latter playing the kindly old woodcarver Gepetto, Pinocchio largely follows the beats of the Disney movie, so this is clearly geared for the all-ages crowd. Hanks is perfect for the role of Gepetto. We already love Hanks in pretty much everything he does. We see him as a father figure, someone to both respect and empathize. When Gepetto refuses to sell any of his precious, hand-carved clocks to a customer we understand it’s because this shop and all of its contents mean everything in the world to him. That includes his cutesy CGI feline Figaro, and his pet fish Cleo. But most importantly it applies to Pinocchio (voiced by Benjamin Evan Ainsworth), the puppet he wishes were real as a means of overcoming a deep mourning from a past tragedy. Sitting in the corner watching Gepetto’s nightly prayers is Jiminy Cricket (voiced by Joseph Gordon-Levitt), and it isn’t long before the Blue Fairy arrives, played by Cynthia Erivo whose soulful singing voice give us the “Wish Upon a Star” melody we all know and love. Gepetto’s wish comes true, the strings are cut away from Pinocchio, and Jiminy becomes the boy’s conscience, not that he ever listens.

The adventures of Pinocchio unfold mostly as you expect, but there are a few welcome changes. Gepetto is significantly more interesting now, perhaps because they wanted to make the best use of Hanks’ talents. We learn more about why Gepetto does what he does, and why he goes on an adventure of his own to rescue Pinocchio. New characters are introduced who teach Pinocchio what it’s like to make real friends, such as circus performer Fabiana (Kyanne Lamaya) and her marionette Sabina. Lorraine Bracco voices the chatty seagull, Sofia, who helps out in a pinch.

But working in live-action has some major drawbacks. Animation allowed for much easier transitions as Pinocchio moves from place to place, as his journey takes some wild extremes. Zemeckis’ Pinocchio labors as it moves from Stromboli’s circus to places such as Pleasure Island, which is like the Foot Clan hangout run amok, to the inside of Monstro the Whale which feels like an afterthought and not the perilous situation it ought to be. The villains don’t really work, either, with the exception of Keegan-Michael Key’s foxy Honest John. Luke Evans voices the devious Coachman, Giuseppte Battison plays the cruel Stromboli, with Lewin Lloyd as the mischievous pseudo-friend Lampwick who lures Pinocchio into becoming a rowdy truant. Their transformation from boys to donkeys is still disturbing, even moreso with the life-like visual effects.

Zemeckis has done an amazing job in bringing Pinocchio to life, with the character perfectly resembling what he would look like in reality. He moves fluidly and with pep in his step, and Ainsworth voices him with bubbly good cheer. Even when he’s lying or being a brat he sounds like a dream. Unfortunately, the backgrounds are drab and only a few cool Easter Eggs (particularly in Gepetto’s workshop!) make them worth paying attention to.

Without giving away exactly how Zemeckis and co-writer Chris Weitz do it, the conclusion of Pinocchio is changed for no good reason at all. Perhaps because they felt they hadn’t left enough of a fingerprint on the story by that point? The new conclusion betrays the entire theme of the story and was clearly done for the most manufactured of reasons. My cynical self believes it was done so that, if Disney is inclined, they can more easily launch into a sequel. If I wanted to be charitable, and I don’t, it would be to embrace a message of acceptance of one’s differences compared to the rest of the world. But Pinocchio is ultimately a fantasy, and why stick to the formula through so much just to alter this one thing in such a dramatic way?

There’s little magic in this Pinocchio, and it would be wishful thinking if Disney tried to put this in theaters. But as a Disney+ exclusive, released on September 8th as part of the Disney+ Day celebration, it might keep the kids occupied and their noses out of trouble for a while.