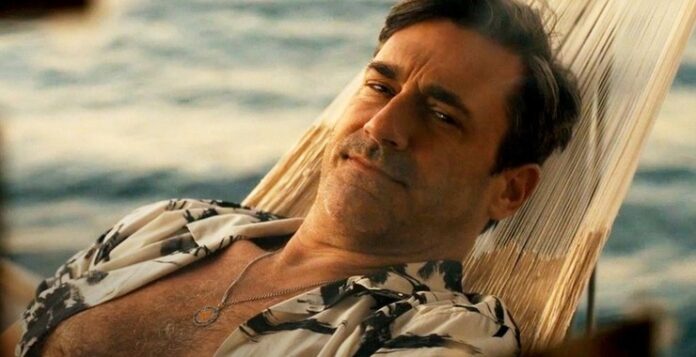 If you were a fan of Chevy Chase in the ’80s, like I was and so many others were, it’s likely that you also loved him in Fletch. And why wouldn’t you? He’s hilarious as the bumbling reporter who can’t stay out of trouble. Here’s the thing: that wasn’t Fletch. If you’ve read any of Gregory Mcdonald’s 11 Fletch books that becomes very clear. The 1985 movie was a hit and great if you loved Chevy Chase. But there’s a reason its sequel, 1989’s awful Fletch Lives, is an original story and not an adaptation.

After many years of failed attempts at a reboot, Confess, Fletch arrives with Jon Hamm in the titular role and Greg Mottola behind the camera. The best thing about it? It’s perfect as both a Fletch movie and a stand-out role for Hamm, who gets the peculiar, deadpan humor of the novels exactly right. You remember in Mad Men the way Don Draper could nonchalantly savage someone with a single line of dialogue, delivered so effortlessly it barely disturbed his martini? Imagine that but with hilarious punchlines, instead.

Hamm’s Irwin M. Fletcher is no idiot. He might be a bit odd, given to nonsequiturs, and certainly always in the wrong place at the wrong time, but he’s fast with a quip, disarming (especially to women), and ballsy a Hell. He always sticks out like a sore thumb, like being in Boston and sporting his iconic purple Lakers hat with a blazer. It makes him very easy to track down when he walks into his rental apartment and finds a dead woman inside. Well, there’s that and Fletch doesn’t think himself a suspect so why bother hiding? Even as the aptly-named detective “Slo-Mo” Monroe (The Daily Show‘s Roy Wood Jr.) and his genuinely bumbling sidekick Griz (Ayden Mayeri) close in on Fletch as the prime suspect, he never hides. Just keeps doing his thing, which is investigating the theft of priceless art pieces from an Italian client who was kidnapped for ransom.

So Fletch has his own batch of suspects to sift through, and they are all wackier than the last. Confess, Fletch benefits from a tremendous supporting cast that surrounds Hamm. If his version of Fletch is less goofball than Chase’s, Hamm’s co-stars more than make up the difference. Lorenza Izzo is a terrific caricature of an Italian socialite as Angela, Fletch’s sexy new girlfriend and daughter of his kidnapped client. Could she be playing Fletch to her own twisted ends? There’s also Marcia Gay Harden, rockin’ purposely deep Italian accent and unquenchable libido as Angela’s mother. Also kicking in their share of laughs are Annie Mumolo as Eve, Fletch’s stoner neighbor, and Lucy Punch who finds a way to make “bespoke” funny. Kyle MacLachlan is also great as an art broker with germophobia and a passion for EDM. Mad Men fans will dig the reunion between Hamm and John Slattery, who plays his former editor, but they’ll wish there could be more to their few scenes.

And that might be the one quibble with Confess, Fletch. It’s actually better when you get away from the mystery itself. The best stuff finds Fletch just interacting with this weird little upper-crusty world he’s in the middle of. Fletch is just such an uncanny dude that it doesn’t matter where he is, like even in his old newspaper office where he should be comfortable, and he’s still the odd duck.

Fletch is fascinating, Hamm has never been funnier, but is Confess, Fletch the start of a new franchise or what? That, I’m not so sure, but I hope so. Yes, it’s great, but the humor is specifically-targeted and wouldn’t work if it went broad like so many comedies do to be successful. Confess, Fletch is a comedy gem and it’s possible only those who know to look for it will get the most value from.

Confess, Fletch is open in select theaters and PVOD on September 16th, followed by Showtime on October 28th.