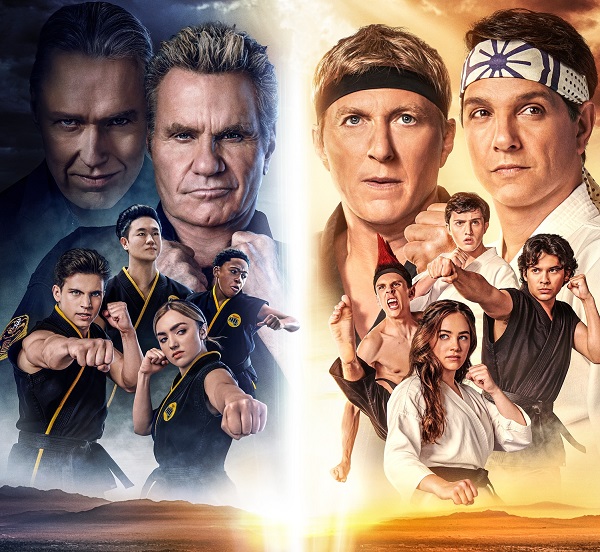 Once again, I have to pinch myself while watching Cobra Kai and say, “this show has no business and shouldn’t be so damn good!!”

A TV show based on The Karate Kid franchise, and in which the protagonist is the “villain” from the original movie should NOT work on any level, but somehow Cobra Kai not only does it, but it does it outstandingly. First appearing on YouTube Red before it was sold off to Netflix, Cobra Kai has delivered season after season of some great storytelling for a franchise that has been going on for the past 37 years.

When season 3 ended Daniel (Ralph Macchio) and Johnny (William Zabka) decided to put their decades-long rivalry on hold and team up against John Kreese (Martin Kove), who had taken over the Cobra Kai dojo from Johnny. Johnny decided to branch off and create his own “Eagle Fang Karate” dojo and team up with Daniel’s “Miyagi-do” dojo to take on Kreese. The stakes are high for everyone involved. If they beat Kreese and Cobra Kai in the upcoming All Valley Karate tournament, then Cobra Kai will leave the valley forever. However, if they lose, then their dojos will also be gone as well. So, these bitter rivals will finally be forced to team up to take the true bad guy down.

If that sounds too easy to be true, that’s because it is. Johnny’s style of karate is very similar to Kreese’s and is one of aggression versus Daniel’s style of true and blue self-defense. This causes the two competing styles to be at war with each other and Daniel and Johnny to be at odds with each other in the initial episodes. Daniel uses Mr. Myagi’s approach (painting the fences, meditating, and defensive tactics), while Johnny is literally practicing child abuse with his students to train them up by beating the crap out of them. They must find some sort of balance. One interesting aspect about their new partnership is that both Daniel and Johnny take some time to try and learn each other’s style of karate. It’s very interesting watching Daniel learn how to be more aggressive while Johnny has to learn how to find his inner Zen (if he even has one).

Meanwhile, Kreese is making sure his dojo is ready for the tournament, which means he needs to get his former war buddy (and Karate Kid III villain) Terry Silver (Thomas Ian Griffith) out of retirement to come and help him train his students. Terry Silver at first is hesitant as he’s living a life of luxury as a successful businessman, having wine parties, and not really interested in a high school karate tournament. Of course, it doesn’t take long for his karate juices to start flowing and he comes back into the fold and helps Kreese train their students in their “strike hard, strike first” philosophy. Having recruited Johnny’s estranged son Robby (Tanner Buchanan) to their dojo, Kreese and Silver know they have a proverbial ace up their sleeves as Robby knows both Daniel and his father’s fighting styles, and he wants to get even with both of them.

While the adults have their own drama in Cobra Kai, so do the kids. Miguel (Xolo Maridueña) has surprisingly taken an interest in Daniel’s style of Karate, which doesn’t bode well for Johnny, who he has taken under his wing and pretty much treated better than his own child. Oh, and Johnny and Miguel’s mother Carmen (Vanessa Rubio) have been seeing each other on the down-low, and finally, have to tell Miguel. Johnny of course doesn’t know how to interact with his pupil after the cat’s out of the bag, which has plenty of hilarious moments. Daniel’s daughter Samantha (Mary Mouser) is still navigating PTSD from her home invasion fight with Tory (Peyton List) and starts to think that maybe Johnny’s aggressive approach might be good for her to be able to deal with Tory. Speaking of Tory, she has a great deal to do this season as she navigates her home life and karate life as they both spiral out of control. Eli “Hawk” Moskowitz (Jacob Bertrand) finally joined back with the good guys last year, but his search of identity (or lack thereof) has caused him to have a crisis of confidence, not good if you want to be the number 1 badass for the team. The introduction of new character Kenny (Dallas Dupree Young), who gains a newfound confidence in joining Kreese and Silver’s dojo after being bullied by an all too familiar face also showcases some strong moments throughout Cobra Kai’s 4th season.

Good God Cobra Kai is so much fun and still firing on all cylinders! Whether it’s Jonny’s “still stuck in the 80s” ever so classic comedic bits (are we ever going to give William Zabka his Emmy or not??) or the high stakes drama either between the adults or the kids, this show “gets” not only the Karate Kid franchise, but it also knows how to properly continue and evolve the franchise, and it also these characters very well. I keep waiting for Cobra Kai to fall apart under its own weight, and yet it doesn’t appear to be doing this anytime soon. Once again, this is a show about high school karate, but instead of a great comedy-drama about friendship, rivalries, coming of age, and everything in between done to perfection. Nothing about this show should work on paper, and yet, almost everything does!

And I say “almost” everything works because there are few story elements that do not work in season 4 of Cobra Kai. While Terry Silver was a mustache-twirling villain in The Karate Kid III, it made sense because that movie came out in 1989. When first reintroduced at the beginning of the season, Silver seems more levelheaded. However, by the end of the season, he’s in full WWE Heel mode. While it’s earned, it still feels out of place a little. There is also the reintroduction of characters from past seasons of Cobra Kai, while one of those characters coming back works, another character’s return is incredibly annoying, but does make sense to the overall plot.

Whatever misgivings one may have of a few plot decisions of Cobra Kai, that all gets put to bed towards the end of the season. The actual karate tournament has changed since season 1 of Cobra Kai, and the directing and fight choreography is top-notch. The show knows how to display drama through fighting in an incredible manner. Even if the fights are somewhat predictable, you are on the edge of your seat watching it all unfold because of how attached you are to the characters as well as the execution of directing, writing, acting, and fight choreography done by Josh Heald, Jon Hurwitz, Hayden Schlossberg, and their team. By the end of the final episode, you are almost begging for a 5th season to immediately come out!

Once again: THIS SHOW HAS NO BUSINESS BEING THIS DAMN GOOD!!!

Cobra Kai will be streaming on Netflix on December 31st.