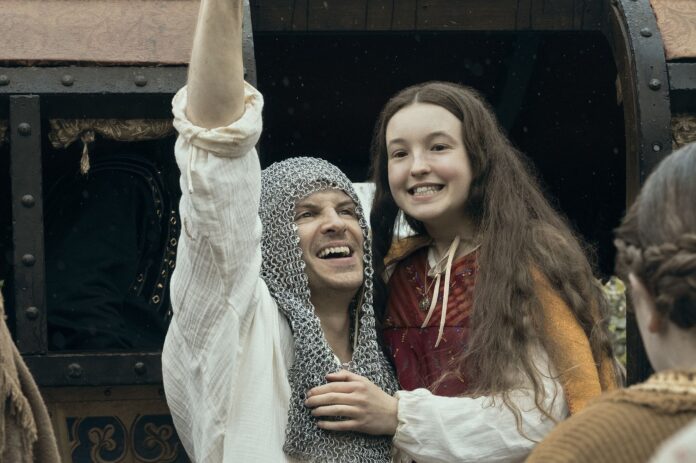 When we first meet the titular character in Catherine Called Birdy, she is covered in mud and participating in a Medieval wrestling match. This is a far cry from the depictions of well-bred ladies we see in period pieces. Playing at full volume, is a slightly slower female version of Supergrass’ 1995 hit, “Alright” As soon as we see the bright smile upon Birdy’s face (Bella Ramsey), we know we are in for a joyous ride.

This feeling continues throughout the film as we are introduced to different aspects of Birdy’s life as though we are reading her diary. We meet her always pregnant mother (Billy Piper) and older brother (Dean-Charles Chapman). She introduces us to her birds, her nurse, best friend, the uncle she has sort of has a crush on (Joe Alwyn), and literally every aspect of her Medieval life. At 14, she is ever at odds with the men in her family –  her father, Lord Rollo (the impeccable Andrew Scott) is no exception.

Having squandered away his wife’s riches on parties and dead tigers, he realizes his only option is to “marry” Birdy off to collect the dowry money. What follows over the course of a year of finding a match is a series of one-liners and terrific verbal showdowns between Scott and Ramsey.

This is Lena Dunham’s second directorial effort this year and boy does this film get her best efforts. Based on the beloved and acclaimed mid-level chapter book by Karen Cushman, Dunham’s directing and writing style is masterful, leaning into Ramsey’s natural wit and naivety.

Known for her role as the tough and brilliant Lyanna Mormont in Game of Thrones, Ramsey is steadily proving she can leap from child star to seasoned actress, With appearances in His Dark Material, Becoming Elizabeth,  Judy, and the upcoming The Last of Us, Ramsey proves she is one to watch in Catherine Called Birdy. Part Eloise at the Plaza, part Fleabag (coincidentally the show Scott is known for) Ramsey straddles the line between childhood and womanhood with such ease, bringing broad hilarity when chasing away a suitor and quiet reflection with just a look when her mother might lose another baby.

Dunham has some of the best working British actors working on this film and giving their all. Scott turns from “dick” to “daddy” with minimal effort. His chemistry with Billie Piper is electric, especially in the final scene between them. Sophie Okonedo pops up as Birdie’s new eccentric Aunt, proving she is one of the best character actors working.

I remember hearing about some ancient Mesopotamian writing being found and instead of it being some wise musings or mythological text, it was simply a young man complaining about his parents. In these period portrayals, we often forget that teenagers were still teenagers, pissing off their families, getting into fights with their friends, and finding their own voice. Catherine Called Birdy is a great reminder of how wonderful and heartbreaking growing up has always been.

Catherine Called Birdy is playing in theaters and on Amazon Prime October 7.