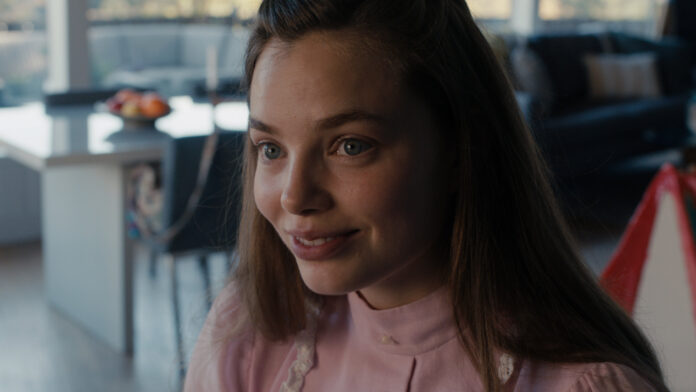 Count me as one of those who hate-watched Girls. I have a fascination with Lena Dunham and the shallower-than-bathwater cast of white characters she creates. People still praise her for 2010’s Tiny Furniture, the indie darling that was her major breakout, for all of its cutting humor, honesty, and so-called insight. I guess so. To me it was just Dunham talking about herself and Girls was multiple seasons across multiple episodes of the same, only with a lot more sex and Adam Driver. Sex is a favorite topic of Dunham’s, but she doesn’t seem to have anything special to say about it. She just likes it as a topic. And that about encapsulates her later feature, Sharp Stick.

Feeling less like creative inspiration and more like Dunham feeling obligated to do something during the pandemic, Sharp Stick is a ridiculous trifle filled with interchangeable characters with interchangeable dialogue. And yet it’s also very calculated to underwhelm, because expectations are astronomical. It’s clear this is a very low down and gritty production, not quite Mumblecore levels but not far from it. Multiple characters are crammed into tiny spaces, and when one ventures out they are sure to wear their mask, COVID-19 protocols in full effect.

Set in Hollywood, the story follows 26-year-old Sarah Jo (Kristine Froseth, bubbly and committed), who with her cherubic face and bright-eyed gaze is very much a child at heart. She is, also, very sexually inexperienced, having been set back at an early age by a radical hysterectomy. Still a virgin, Sarah Jo yearns to gain the experience that her cynical multi-time divorcee mother (Jennifer Jason Leigh) and overstimulated adopted Black sister Treina (Taylour Paige, in a pitiful role), a Tik Tok-er hunting for a sugar daddy, both share. Between her mother’s awful relationship oversharing to Treina’s booty-shaking videos, Sarah Jo is a well of bad decisions waiting to happen.

So much of Sharp Stick is Dunham just wasting time until Sarah Jo can start bangin’ with reckless abandon. The conversations are banal and the actors don’t seem to care about saying them, either. Reportedly, Taylour Paige was hesitant to star in the film, feeling that her role was written for a white actress. Dunham convinced her it wasn’t, but you’d never know it. Everyone sounds the same; self-involved and unaware. There just isn’t much of a point to any of it. The adulterous affair, which eventually blows up in Sarah Jo and Josh’s faces, is all just prelude but it eats up much of the film. Once Sarah Jo begins to explore her sexual whims, lusting after a well-known pornstar played by Scott Speedman (!!!) it quickly becomes clear that Dunham doesn’t actually have anything to say about any of it. Dunham wants to portray Sarah Jo’s sexual freedom as some sort of statement about all women’s sexual independence but the message is both heavy-handed and uncertain. There’s no actual story being told here. Sharp Stick exists to be provocative, to keep Dunham’s name out there to those who still follow her every word, but it offers literally nothing else of value.

Sharp Stick is in limited release now, expanding to more theaters on August 5th and a digital release on August 16th.