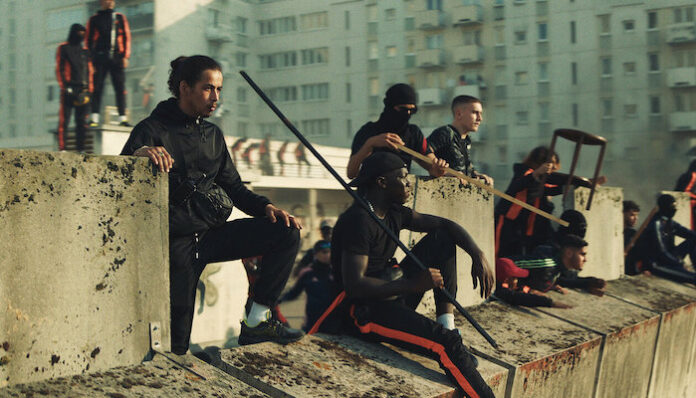 What is it about the French that they make the best, most visceral films about protest, unrest, and social justice? It’s a tradtion that goes way back, think Les Miserables, and continues today with Romain Gavras’ unbelievable new film, Athena. This movie is simply incredible, especially if you have no idea what you’re signing up for. It’s a story of brotherhood, violent protest, and emotional conflict on the level of a Greek tragedy, all as the viewer is whipped from scene to scene at a breakneck pace too fast to comprehend.

The opening scene…Hell, the opening hour, is simply astonishing. It starts with a press conference at a Paris banlieue called Athena. In the wake of a boy’s death at at the hands of police, the leaders are calling for calm. The dead boy’s eldest brother, local hero Abdel (Dali Benssalah), wants to maintain the peace until the men are found. The camera aggressively pans over to Abdel’s other brother, Karim (Sami Slimane), who is having none of it. Karim, who is like his brother’s dark polar opposite, lights a Molotov cocktail and hurls it at the stage, setting everything ablaze.

The explosion is emblamatic of the fire that is raging all across the city. Swarms of Karim’s followers, all people who are sick of the injustice and the police brutality, attack the police station relentlessly. Gavras and DP Matias Boucard have one Hell of a job on their hands. Karim is everywhere, tracking through hallways, into ecaping vans, across train tracks, and through mobs of protestors. There’s just so much going on, and Gavras never misses a moment, seamlessly capturing an entire world of activity in the background; innocents attempting to escape, more activists on dirtbikes tearing through the city, fires burning, people screaming. The chaos is unreal.

The amazing thing is that Athena manages to keep this momentum going through the entire 90-minute runtime, while never forgetting to add crucial character beats. Gavras doesn’t cut often, but when he does it’s meaningful. Karim and Abdel’s paths will intersect often, the brotherly divide growing and then, at a crucial moment, almost becoming intertwined and indistinguishable from one another. The sibling drama is so thick it’s almost Biblical.

Perhaps we shouldn’t be surprised at the themes at play here or the almost glorification of such violent calls to action. One of the film’s co-writers is Ladj Ly, who made his feature debut with the similarly-themed 2019 version of Les Miserables. Ly has forceful perspective and isn’t afraid to share it, and in Athena he found willing collaborators on spreading that point of view. It’s miles better than other filmmakers who attempt to play it safe. There’s no playing it safe with Athena, it is an uncompromising, bold, utterly immersive effort that feels like the start of something bigger. For there will always be injustice, and people who have been ground down to the point where violence is the only logical response.

Athena is streaming now on Netflix.