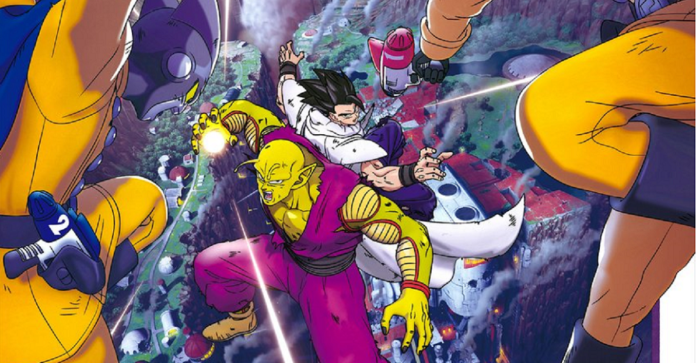 I don’t consider myself the most devoted Dragon Ball fan. When Akira Toriyama’s beloved shonen series debuted here in 1998, my friends and I were captivated because of course we were. Bright, badass fighters hurling around universe-destroying powers against foes who were just as powerful. But I quickly fell out of it, and now lately my only connection to it is when one of these feature films comes to the west, the last one being Dragon Ball Super: Broly in 2018, coincidentally the last time there was a new episode of the show. And yet the latest feature, Dragon Ball Super: Super Hero wasn’t the least bit intimidating for a casual fan like myself. Instead, it felt like “welcome home” to the insane battle world populated by super-saiyans, killer androids, and giant wish-fulfilling dragons.

Dragon Ball Super: Super Hero is a reminder of what makes this franchise so addicting. In the rare moments when there isn’t a cataclysmic slugfest, it’s infectiously silly and childish. The bulk of the story focuses on the self-serious Piccolo, who is trying and comically failing to get the all-powerful Gohan to stop being an academic and to start training again, in case another world-threatening evil comes along. So much of the film is about Piccolo using Gohan’s precocious daughter Pan to try and lure her father back into the fight. This becomes absolutely necessary when a new threat indeed arrives.

It can be incredibly intimidating to try and remember everything that’s happened in the Dragon Ball universe, but this film streamlines it to perfection. It doesn’t hurt that they also brought back villains who are easily described: the Red Ribbon Army, a villainous group of brilliant minds who designed powerful Androids that wreaked havoc years earlier. The group was defeated, but now they’re back under the guidance of Magenta and genius Dr. Hedo, who creates androids Gamma 1 and the spirited Gamma 2, the latter believing himself to be a super hero fighting for the side of good. He’s so cool and heroic when he hits you, the comic book sound effects are visible to everyone.

What unfolds is a classic comic book scenario, too, as heroes misunderstand one another and get into a huge fight before eventually joining forces to defeat an even greater threat. It will always be jaw-droppingly awesome when these characters brawl. The sheer amount of power being unleashed, the constant escalation of abilities, the transformations, and the unthinkable damage they cause…it’s just so much to take in and it never gets old. What makes the fights better here is that the 2D animation is now joined by CGI and 3D technology, very similar to what’s used in the hit Dragon Ball Fighterz video games. It adds punch to every single battle. Even a throwaway sparring match between Goku and Vegeta, while squirreled away in training alongside Broly and Dragon Ball‘s best character in years, Beerus (a cat-like god of destruction who is easily tamed by food and, we learn, women of a certain type) rocks more than it has any reason to.

The main event features Piccolo and a host of others, from Android 18 to Trunks and Goten, and even Krillin stops being the most powerful member of the local police force to join in. Even with so many heavy-hitters, none of them are brought back without some kind of comedic twist borne from their lack of consistent training, which only serves to piss off Piccolo even more. And for Mr. Satan fans, the mighty wrestler Hercule Satan gets his due as the world’s “savior” without ever actually appearing in the movie.

Dragon Ball Super: Super Hero truly feels like director Tetsuro Kodama and Toriyama, in the latter’s fourth-produced feature, have been dying to unleash these characters back out into the world. For fans who have felt the long four-year wait, this will be everything they were hoping for, even if the story is a bit simple and straight-forward. That’s actually to the film’s overall benefit, and perhaps could bring some back into the fold and interested in Dragon Ball again, as it did for me.