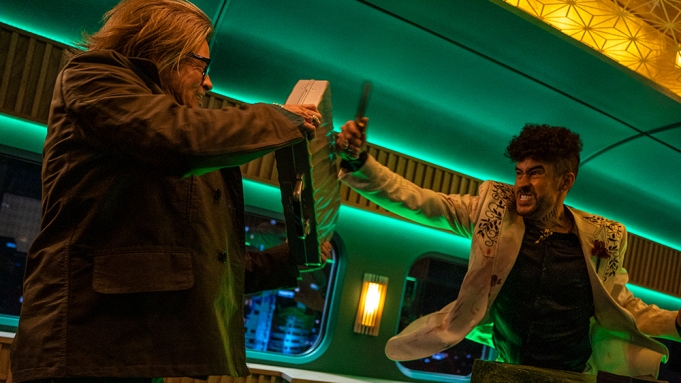 I’ve watched my favorite genre, the hitman/assassin thriller, basically tell the exact same story for about 40 years. That extends all the way up to Netflix’s recent The Gray Man, which is generic stuff dressed up with a glossier cast and better catering. So thank goodness we’re seeing directors really flex their creative muscle with a genre that is made for it, and Bullet Train is the best of the bunch. This chaotic bubblegum mish-mash of Japanese and American bullet time is a riot, over-the-top, violent as Hell, and so much damn fun.

Based on Kotaro Isaka’s novel MariaBeetle, Bullet Train is both a playful adaptation but also very much its own thing. Brad Pitt stars as reformed assassin codenamed Ladybug. He’s a killer with, he thinks, the worst bad luck ever. He’s not completely wrong as his latest job, which is supposed to be a cinch, gets botched up royally by a raft of bizarre, colorful, and wildly entertaining characters. A simple “snatch and grab” job involving a suitcase on a Tokyo bullet train turns bloody due to a complex weaving of interconnected revenge plots.

Here’s the thing about Ladybug; he’s not just reformed. He’s like, self-help reformed. Spouting nonsense about “you’re getting the new me” and all sorts of zen bullshit, he’s hilariously insufferable, especially when played by Pitt who can come across as so chill as to be frozen. The others on the train have no chill. There’s the  Brit “siblings” Lemon (Brian Tyree Henry) and Tangerine (Aaron Taylor-Johnson), who bicker and banter like castaways from a Guy Ritchie, especially about Thomas the Tank Engine, which Lemon sees as his personal guidepost to life. There’s also the Prince (Joey King), a seemingly innocent schoolgirl with a killer disposition. Woven into the mix is Kimura’s (Andrew Koji) quest to find the killer who pushed his son of a roof, plus the mysterious Hornet (Zazie Beetz), a runaway poisonous snake, rapper Bad Bunny as the vengeful slayer known as The Wolf.

And that doesn’t even come close to nailing all of the various plots and revenge tales that cross paths with one another. You also have the boogeyman-like presence of The White Death, a Kill Bill-esque figure lurking in the shadows. Chaos is the order of the day, and your mileage may vary because for a while it seems like nothing makes sense. There are rapid cuts from one scene to the next, a heavy amount of exposition and flashback to inform characters who may or may not be important. A lot of it just seems like madness for the sake of madness. The train seems to have a personality and internal logic all its own. There’s a great bit with the “quiet car” and one “shooshing” passenger, and one car that’s like a Tamegotchi nightmare come true.

It isn’t every director who can commandeer this amount of craziness, but David Leitch is one of them. The stuntman-turned-director best known for his John Wick, Deadpool 2, and Atomic Blonde action flicks crafts some nutty fight sequences that lean closer to Jackie Chan and The Raid than they do his previous stuff. Everything you can imagine being used as a weapon gets used, with Leitch and his team dreaming up imaginative uses for the tight, confined battles, of which there are plenty. One set in a dining car is an example of Bullet Train at its best, combining brutal impact with deft displays of humor.

The cast is excellent all around, but it’s Pitt who seems like he’s having the most fun. We haven’t seen him in a role that allows him to cut loose with this amount of physicality, while also firing off jokes at a Tarantino/Ritchie rate of fire. And he makes it look like a breeze. One of my favorite actors, Hiroyuki Sanada, has a small but crucial role and an absolutely baller swordfight that gives this lethal comedy a more serious edge.

Bullet Train is A LOT. It’ll be exhausting for some, exhilarating for others, and I count myself in the latter category. If there’s an easy tonal comparison it would be to last year’s Gunpowder Milkshake, which I also absolutely loved. So perhaps this is a personal taste thing, but I want my hitman movies to be as off-the-hook as possible from now on. I would book passage aboard Bullet Train again in a heartbeat.