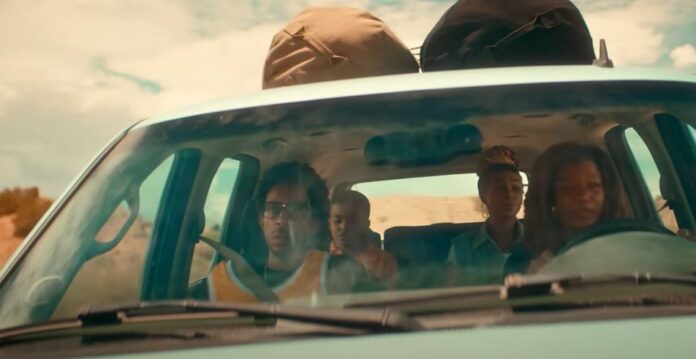 Whew…I was not prepared for the tonal shift of this trailer. Starting out with a dorky looking Ludacris and a, somehow still 35 year old looking, Queen Latifah in the car with family on a desert road I immediately pegged this as a ‘National Lampoon’s Vacation’ type film. This was only solidified by the opening dialogue wherein the kids ask if there’s anything good in Houston (their destination), the adults respond with Destiny’s Child and Scarface, with the kids responding back “who?”. I really don’t need that ageism this early in the morning!

The fun and games is soon over when the family is woken up in a run down hotel by noises of fighting and a gun shot, they find their Motel neighbor has been shot and while Queen Latifah issues aid, Luda eyes a bag of cash which he grabs. What he doesn’t know is that the cash in question belongs to a drug lord, one who’s going to want that money back. Yeah….this ain’t the Griswold’s.

A film that looks to be full of action and commentary of the world’s current race relations crisis Netflix seems to have swung again at that glorious mid-budget feature category. Thank God they came in to save these films from extinction!

Queen Latifah and Chris Bridges star in this road trip thriller about a mom of two kids who relocates across the country with her kids and brother. The family’s move to the southland is thrown into complete chaos when they witness a murder on their road trip. Now, the murderer will stop at nothing to find them.