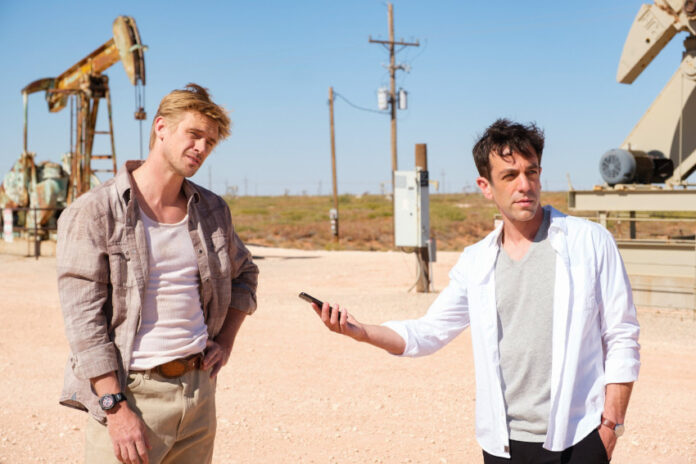 “So as like, a personal boundary, I don’t avenge deaths. It’s just who I am.”

In BJ Novak’s directorial debut, Vengeance, his character Ben, a New York journalist and aspiring podcaster with a bit of a slimy side, makes this admission to Ty (Boyd Holbrook), the grieving, vengeful brother to Abilene (Lio Tipton), the sister he believes was murdered. It’s the kind of thing that would make complete sense almost anywhere else in the world. But in Texas, where taking the law into your own hands is damn near a pasttime, it’s received as pretty damn silly.

But it almost might be a statement about the movie itself. Novak, best known for his time on The Office, is a comedy writer. And while Vengeance does begin with the eerie, silent, slow death of Abilene in the middle of an oil field, this isn’t a horror movie. It barely qualifies as a thriller, and certainly Charles Bronson wouldn’t have come anywhere near it. Vengeance is a funny, insightful set of observations about crime podcasting, hook-up culture, and small-town myth-making.

Novak makes it tough to like Ben right from the start. When we first meet him, he’s engaged in a sleazy back-and-forth with his equally grotesque pal (played by John Mayer for added yuck factor) about all of the women they’ve nailed. Like way too many bros I know and probably you, too, they co-sign one another’s statements with “100%”, a running gag that adds a bit of realistic pop to the dialogue because you’ll want to smack everyone who says it. Ben, a journo for the New Yorker (mistakenly called New York magazine by pretty much everybody) is like so many blandly unaware, privileged white dudes in that he thinks he’s owed a platform to do his own podcast, like what he has to say is somehow the most special sauce in the entire world. He gets a quick lesson from podcast mega-producer Eloise (Issa Rae) that, no, he doesn’t have a message sent from above, but Ben isn’t one to give up.

Ben gets his shot at potential true-crime podcasting fame when he ends up in Texas attending the funeral for Abilene, a girl he used to hook-up with but was definitely not his girlfriend. But tell that to her family, who found Ben’s number in her phone and gave him a call. Roped into attending the service, and into giving a milquetoast eulogy (“She liked music.”), Ben realizes this absurd scenario would make a great thing for him to talk about. But when Ty theorizes that Abilene was actually murdered, and not the accidental death claimed by the police, Ben thinks he has the perfect backdrop to explore his own ideas on conservative America, while indulging in the kind of conspiracy theorizing that turn true-crime enthusiasts into paid subscribers.

I’ll say this for Vengeance; it’s not at all what I was expecting. Props to Novak for delivering a Blumhouse movie that cuts totally against the grain. The film is basically a fish-out-of-water story, one where Ben ends up staying with Ty and his very conservative Christian family. Being the city slicker that he is, Ben doesn’t fit in at all, but mostly the joke is on him. He comes with a lot of preconceived notions about these local yokels, but he is in their world so he’s the weird one. He doesn’t get their fascination with Whataburger, and how dare he try and Shazam “Deep in the Heart of Texas” at the rodeo? Novak gets the vibe, the little details, that make this tiny corner of Texas feel real and lived-in. With the beautiful lensing of cinematographer Lyn Moncrief, Novak is also able to soften this tough, frontier terrain where the people still wheep over the Alamo.

The smartest move Novak makes, though, is casting himself as Ben. A talented, if perhaps underrated actor, Novak fleshes out Ben enough that we don’t stay disgusted with him for long, and it’s suggested that he is very much a product of his environment. Far away from the shallowness of New York, Ben starts to do what so many need to, and that’s to shut up and just listen. It’s a lesson imparted on him from the film’s biggest surprise to me: Ashton Kutcher. Maybe it’s because I haven’t seen him act in what feels like ages, but Kutcher really impresses as a music producer with a philosopher’s heart. With his big 10-gallon hat and wry smile, Ben thinks he has this guy pegged, and so do we. There’s so much more depth beneath the surface to anyone willing to look for it.

Unfortunately, for all that’s good about Vengeance, it’s not going anywhere that you don’t see coming, and Novak is still finding his footing as a director. Some scenes come across as too sitcom-esque to fit the material, disrupting the effectively moody tone that a good, gripping mystery should be able to carry through to the end. More also should’ve been done to explore the pitfalls of getting too close to your true-crime subject, rather than just playing it up for laughs. Despite a little bit of his inexperience showing, Novak’s launched his directorial career on solid terrain and it should only get better from here.

Vengeance is available in theaters now.

Interview: Boyd Holbrook Talks Werewolf Film ‘The Cursed’, Why He Thought Horrors Weren’t For Him, And More