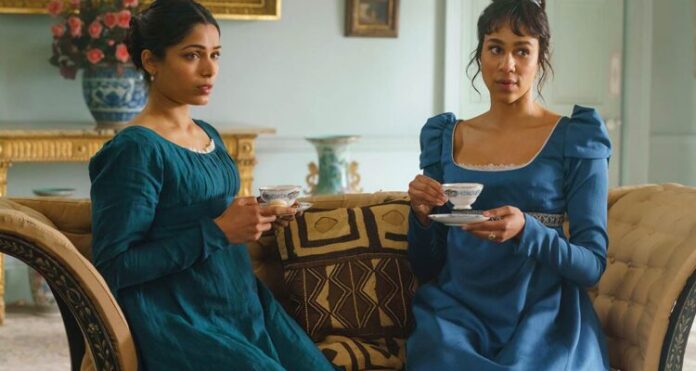 In 2019, lifestyle entertainment website refinery29 released a Regency-set romantic short film. While it sounded like Jane Austen, it looked modern with a colorblind cast led by Gemma Chan, Freida Pinto, Oliver Jackson Cohen, and Sope Dirisu. This was before Bridgerton took quarantine by storm, yet it still resounded with audiences.

Three years later, the feature-length version of that short, Mr. Malcom’s List, is sweeping its way into theaters in the hopes that a longer version can create the same impact as its predecessor. With some changes in the cast, this adaptation of Suzanne Allain’s 2009 book, follows Selina Dalton (Pinto) who has arrived in London to help her much wealthier friend Julia Thistlewaite (Zawe Ashton) enact revenge on a potential suitor. Mr. Malcolm (Dirisu) rejected the aging Thistlewaite after a disastrous date to the opera where he concluded that she didn’t meet the physical or intellectual requirements he had for a mate. It ended with her being ridiculed in the gossip sheets.

Despite much coordination from Julie and her cousin Lord Cassidy (Oliver Jackson-Cohen), Selina and Mr. Malcolm meet on their own and quickly form an attachment, throwing a wrench into Julia’s plans. In a series of misunderstandings and misgivings, Mr. Malcolm finally falls in love.

Allain’s story, (she also wrote the script),  plays out much like you think it would. Director Emma Holly Jones gives standard Regency fair that we’ve seen before.  Both Pinto and Dirisu give pretty utilitarian performances as the leading characters. Theo James (who starred in the first season of Jane Austen’s Sanditon)  plays a supporting role as a potential suitor, giving “Regency Daddy” vibes the entire time. Ashley Park brilliantly pops up as an obnoxious and over eager cousin to Selina, providing some much needed laughs.

The best part about Jane Austen’s work is that amid the romance, she always pointed out something about society. Whether it was the difference between genders or classism, she was always commenting on something. Maybe it’s an unfair comparison to make considering most Regency-set media we receive now has Austen’s name on it, but Mr. Malcolm’s List is nothing more than a mostly well-acted and thought-out romantic comedy. There’s absolutely nothing wrong with that. Conversely, there are about 45 minutes where nothing seems to happen.  As the film goes on, the laughs become more sparse. It sometimes feels like we are only watching beautiful people run around London in funny dresses and hats for close to two hours.

Unlike Bridgerton, which claimed color-blind casting and then briefly addressed race in season 1, Mr. Malcolm’s List really doesn’t mention its actors’ races at all. It’s refreshing to see a love story starring a South Asian woman and a man of African descent in beautiful and expensive clothing waltzing around a ballroom and private gardens. I just wish the film was more exciting and less predictable.