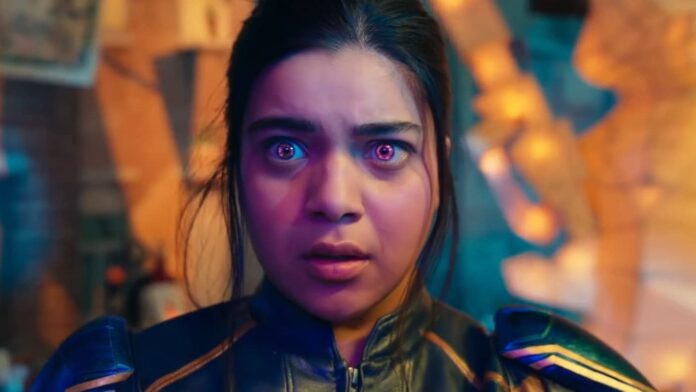 The MCU is the most cohesive cinematic universe, well, ever. You can count on every project to fit like a puzzle piece into the overall picture, and because of that fans expected the conclusion of Ms. Marvel to end with an appearance by a certain superhero that shall remain nameless for now. Well, that encounter did indeed happen during the post-credits sequence, but there was a lot of secrecy behind it. Not just from fans of the show, but from the series’ directors. SPOILERS beyond this point!!

In an interview with Collider, Ms. Marvel directors Adil El Arbi and Bilall Fallah revealed that they were as unaware of the appearance by Brie Larson as Carol Danvers/Captain Marvel as we were and that it wasn’t them who shot it…

“So, that was actually — Nia DaCosta shot that while she was shooting ‘The Marvels,’” said Bilall Fallah. “She was on set with Brie Larson and Iman, and she didn’t know that scene was going to be used for the post-credit scene. Marvel is very good in separating all the things. So, we would always ask Kevin [Feige], ‘Yo, when’s Captain Marvel going to show up?’ And he would always tell us, ‘Don’t worry about it. You’ll see.’ Meanwhile, he has said to Nia DaCosta, ‘Just shoot that scene. We need that. And you’ll see.’ And all of a sudden, when we were calibrating the final episodes after the credits, we said, ‘Oh. There’s Captain Marvel.’ So that was a big surprise for us, as well. But it was pretty cool. It was pretty cool.”

The scene is actually pretty interesting, and undoubtedly sets up the dynamic for The Marvels, which is to include Iman Vellani as Kamala Khan/Ms. Marvel. Kamal returns from superheroing and just as she’s about to start her homework, her magic bangle begins to glow. She goes to touch it, and is instantly zapped away in a flash of light. In her place stands Captain Marvel, looking very confused.

So what happened? Well, my guess is that the bangle is actually a quantum band, and we may have a situation similar to what happened in the comics between Rick Jones and Genis-Vell, another hero who had the mantle of Captain Marvel. The two couldn’t exist in the same place, so banging the bands together would send one to the Microverse while the other was free to do whatever. Jones had a similar dynamic with the original Captain Marvel, Mar-Vell.

But we’ll find out soon enough. The Marvels opens in theaters on July 28th 2023.