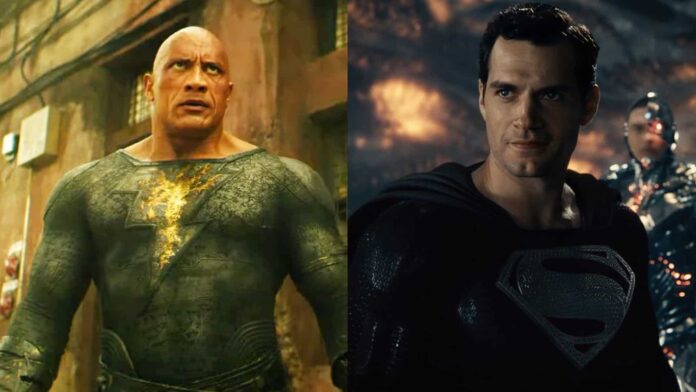 A big disappointment from yesterday’s Warner Bros. panel was that we didn’t get the surprise appearance by Henry Cavill to reveal a new Superman project. However, his name did come up during the Black Adam panel, with Dwayne Johnson getting booed by the audience for suggesting that Cavill may not be the Man of Steel if ever the two super-powered characters were to fight.

Who would win in a fight? #BlackAdam or Superman?

DJ: pound for pound, they’re pretty close. It all depends on who is playing Superman… 👀 pic.twitter.com/JvUfCFSAMQ

So that response didn’t go over well, and Johnson might be in damage control mode. In a conversation with Comicbook.com, Johnson had nothing but praise for Cavill, calling him the “Superman for our generation”. The two share an agent, after all…

“I will say this. I will say that Henry is a buddy and he is a phenomenal Superman. He is a phenomenal Superman and Henry Cavill is the Superman of our generation with respect to the other Supermans of the past. Every time I see him, we have some tequila and I say ‘This guy is Superman.’ My longtime business partner Dany Garcia has been a passionate advocate for Henry Cavill and his career for a very, very, very long time.”

However, it might not matter at all in the end. A new rumor from a scooper that CBM says is reliable (they throw that label around too freely) says Cavill is “unwilling” to come back as Superman, but doesn’t give any confirmed reasons why.

Maybe they aren't offering enough money? Maybe he wants more creative control and they're unwilling to budge? I honestly have no idea, I've heard a dozen reasons from a dozen people.

I still think all the headless/faceless Superman appearances are WB hoping Cavill will eventually return to the role because otherwise they would've just recast already.

Whatever, make of this what you will. I think WB just didn’t want to steal the thunder away from two of their biggest projects that are actually interconnected.