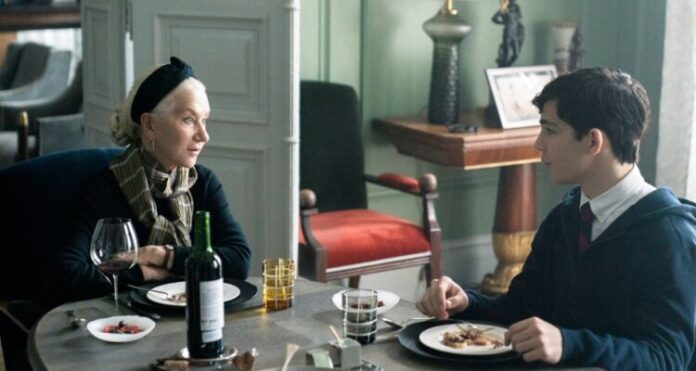 “Choose kind.” If you remember that anti-bullying movement from a few years ago it’s probably because you were a fan of Wonder. The adaptation of R.J. Palacio’s book about a disfigured kid with Treacher Collins syndrome was a surprising hit with over $300M worldwide. It also warmed a lot of hearts. However, for the follow-up film White Bird: A Wonder Story, a very different kind of story is being told.

White Bird moves away from Auggie Pullman and instead focuses on the kid who bullied him, Julian Albans, after he’s been expelled from school. Bryce Gheisar reprises the role in a story that finds Julian listening to a tale of first love from his grandmother’s past in Nazi-occupied France during WWII.

Wonder was a film that really appealed to all-ages, but I’m not sure this one will have the same kind of reach.  However, adults may be drawn to Helen Mirren as Julian’s grandmother, while the rest of the supporting cast includes Gillian Anderson, Ariella Glaser, and Orlando Schwerdt.

The film is directed by Marc Forster, best known for Finding Neverland and World War Z. This is his first feature since 2018’s Christopher Robin.

From the best-selling author of Wonder, the book that sparked a movement to “choose kind,” comes the inspirational next chapter. In White Bird: A Wonder Story, we follow Julian, who has struggled to belong ever since he was expelled from his former school for his treatment of Auggie Pullman. To transform his life, Julian’s grandmother finally reveals to Julian her own story of courage — during her youth in Nazi-occupied France, a boy shelters her from mortal danger. They find first love in a stunning, magical world of their own creation, while the boy’s mother risks everything to keep her safe.