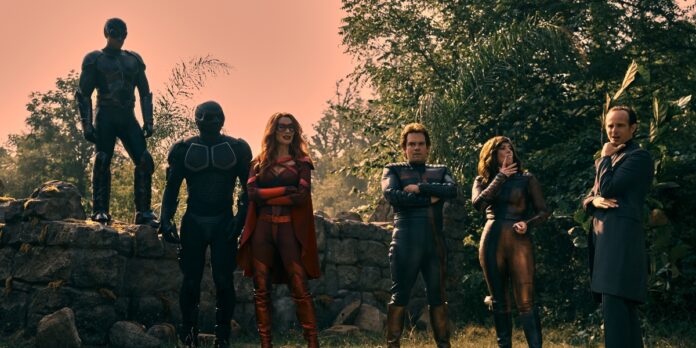 Well, that didn’t take long, did it? Season 3 of The Boys has only been streaming for a couple of weeks, and already Amazon has confirmed the depraved superhero series will be back for a fourth season!

BOOM goes the genitalia. The writers are hard at work on S4 AS WE SPEAK, people. Buckle the fuck up. Seriously thanks for watching, you're the reason we get to make more, haven't had this much fun in years.#TheBoys #TheBoysTV @TheBoysTV @PrimeVideo @SPTV https://t.co/FJLSRC04hj

“From our first conversation with [showrunner] Eric Kripke and the creative team about season three of The Boys, we knew the show was continuing to get even bolder — an impressive feat considering the wild success of the Emmy-nominated second season,” said Vernon Sanders, head of global television at Amazon Studios. “The Boys continues to push boundaries in storytelling while also being relentlessly entertaining and threading the needle on social satire that feels all too real. This stylized world of the series has incredible global reach and the viewership for opening weekend is proof of that. We are immensely proud of the cast and crew that has spawned a franchise for Prime Video, and we look forward to bringing more of The Boys to our customers.”

Based on our review of the first three episodes, this season of The Boys is the craziest yet and it sounds like things are only going to go in bolder directions.

While exact figures are unknown, ratings for season 3 are reportedly up by 17% from season two, and 234% from season one, showing a huge amount of growth for Prime Video.

Episode 4 of The Boys season 3 is streaming now on Prime Video. The season finale arrives on July 8th. [Deadline]