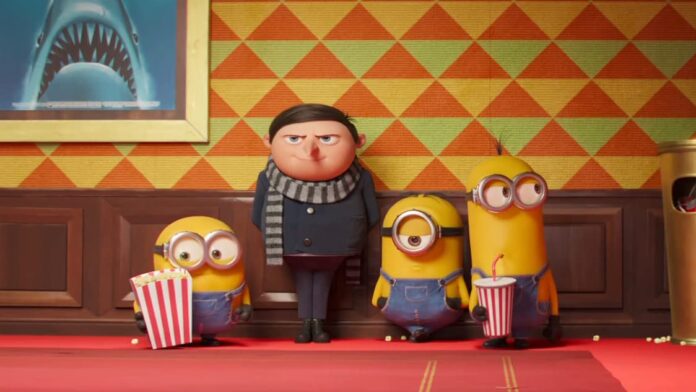 Get ready for hijinks and childish gibberish, the Minions are back! Minions: The Rise of Gru returns to the big screen the most popular characters to emerge from the Despicable Me franchise. Sorry, Gru, but you don’t hold a candle to Kevin, Stuart, Bob, and the legions of yellow misfits at the supervillain’s command. Their Looney Tunes-inspired mischief helped the previous film earn over $1.1B worldwide, more than either of the core movies. Interestingly, The Rise of Gru attempts to cover its bases by telling a story that puts Gru right in the center of the action. While the Minions don’t take a backseat, it’s hard not to miss that the film is considerably goofier, and thus funnier, when Gru isn’t around.

Set in 1976, between the events of Minions and Despicable Me, the film picks up after the Minions have pledged their allegiance to a young Gru (once again voiced by Steve Carell). And while they are instantly committed to their mini-boss, he’s already preparing to join the A-list. Similar to the Despicable Me films, there’s a whole industry built around supervillainy. They’re like celebrities in a sense, and for young Gru, his favorite team of baddies is the Vicious 6, led by his all-time favorite bad guy, Wild Knuckles (Alan Arkin). Gru’s dream is to join them in their notorious exploits, and why wait until he’s grown up when he could do it now?

The Vicious 6 are just one of the many crazy, wildly entertaining characters that keep this film’s energy high. Or perhaps it’s because most of them are voiced by some of my favorite action stars that I dig them so much. Jean-Claude Van Damme voices the ridiculous Jean Clawed who has a giant robot claw; Lucy Lawless is the deadly-pious Nunchuck; Danny Trejo is the big-handed Stronghold; Dolph Lundgren the rollerskating Swede called Svengeance. But the one pushing all of the buttons if the afro-puffed Belle Bottom, voiced by Taraji P. Henson. Belle Bottom instigates the overthrow of Wild Knuckles and takes over as leader. That means there’s an open spot on the roster to fill, and Gru wants in.

While in latter films Gru has accepted the oft-misguided help of his Minions, as a kid he’s less committed to them. He thinks joining the Vicious 6 is something he needs to do on his own. But when the villains basically laugh in his kiddie face, he steals something of importance to them and becomes their target. Well, Gru’s gonna need those Minions, after all.

There’s not a ton of plot here, but what director Kyle Balda and writer Matthew Fogel have done is weave just enough to connect various silly setpieces. The best all involve the Minions and their goofball efforts to get to Gru, first in an airplane sequence that makes Airplane! tame by comparison. Later, they encounter a helpful biker (voiced by Rza), and go through a Jedi-like training sequence with Master Chow (Michelle Yeoh), who trains them in the martial arts in preparation for battle with the Vicious 6. These are by far the most enjoyable aspects of the film. You give us a Minions movie then let us see these sweet and stupid little buggers push the limits of ridiculousness. Giving Kevin, Stuart, and Bob a bit more personality than the other Minions was a smart move, although the addition of portly sidekick Otto (all Minions voiced by Pierre Coffin) feels unnecessary.

Still, there’s something sweet to the Minions’ utter devotion to Gru that they’ll risk life and limb (can they even die??) to save him. It’s also good to see Gru show a bit of childlike awe when in the presence and tutelage of Wild Knuckles, who is willing to use this eager kid as part of his vengeance against his old crew. The Despicable Me films have never been short on heart, and the same can be said here. Gru might be a cold-hearted villain but he warms up to the people he loves most and we can see the beginnings of that in this film.  More than anything else, he wants to feel like he’s part of something bigger, to be part of a family. He’s too young to see that he already has that in his Minion pals, and later he’ll have an actual family of his own.

With a soundtrack that has modern artists remaking ’70s classics, this continues to be the funkiest animated franchise around. Ultimately, Minions: The Rise of Gru is best when it lets the Minions be at their comically frantic best. Where this franchise goes after this is anybody’s guess, but the massive growth of Minions-themed spinoffs, games, and even theme park rides suggests the long-term investment is in them, and Gru might want to remember that a supervillain can’t trust anybody.

Minions: The Rise of Gru opens in theaters on July 1st.