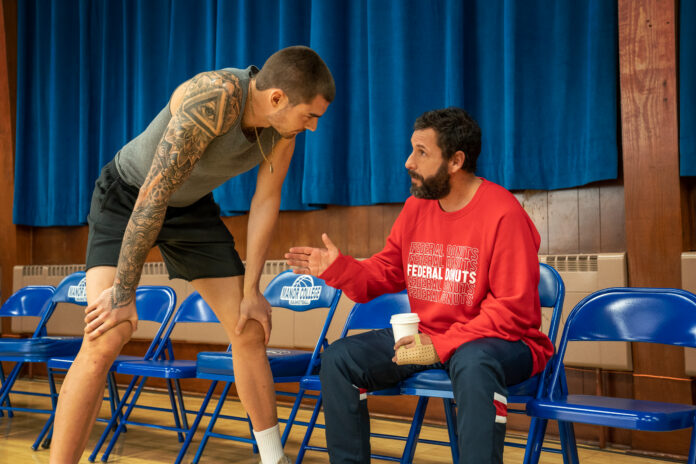 Stanley Sugarman (Adam Sandler) is a basketball lifer in Hustle. That is exactly what he is doing as well. Hustling. All over the world. Stanley is a scout for the Philadelphia 76ers. His once promising basketball career at Temple went down the drain due to injury. However, his relationships and knowledge of the game are as strong as ever. Both of which he uses to find global talent for the NBA. Even though he is good at his job, his real passion is coaching. A passion that longtime 76ers owner Rex Merrick (Robert Duvall) knows about and sees in Stanley. Passion that cannot be ignored and Rex rewards Stanley with the opportunity. 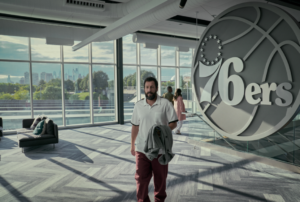 Finally, all of that hard work and time away from his wife Teresa (Queen Latifah) and daughter Alex (Jordan Hull) will be worth it. That is until Rex passes away and his son Vince (Ben Foster) takes over. Stanley and Vince have been butting heads for quite some time. Replacing a compassionate owner with his moronic son isn’t good for business, but definitely not for Stanley. Vince immediately relegates him back to the road with the promise of coaching if he finds the next big star. 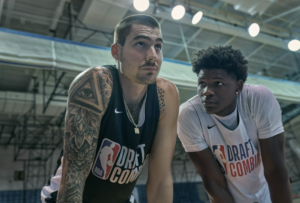 One day during a stop in Spain Stanley stumbles upon a street game where he sees Bo Cruz (NBA player Juancho Hernangómez). Stanley can immediately tell that Bo is different. Plus, he isn’t on anyone’s radar so might just be Stanley’s golden ticket. Getting an unknown 22-year-old to be noticed and ready for the NBA draft is no small feat, but Stanley is determined. With the support of Bo’s mother Paola (Maria Botto) and daughter Lucia (Ainhoa Pillet) Bo makes the trip to the States with Stanley to prepare. Stanley uses his connections including his good friend and super-agent Leon Rich (Kenny ‘the Jet’ Smith) to get Bo noticed. Now it is up to Bo and his drive to make his dreams come true. Nothing can stand in his way… except maybe consensus #2 draft pick Kermit Wilts (NBA pro Anthony Edwards) – who isn’t ready to share the spotlight. 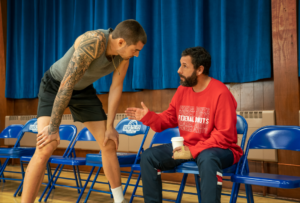 Hustle is directed by Jeremiah Zagar, who only has one full length feature under his belt in 2018’s We the Animals. The film is written by Will Fetters and Taylor Materne. While Fetters has some full-length screenplay experience, Hustle is Materne’s feature length debut. However, Materne has been involved in NBA projects before with the documentary short Dominoes and writing for NBA 2K games in the past. Materne’s basketball knowledge coupled with Fetters writing experience prove to be a solid combination. The two of them create a script that has the perfect blend of humor, emotion, and sport. 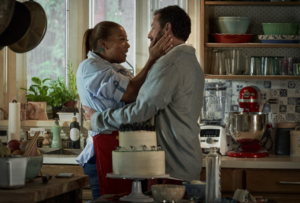 Hustle is not only for fans of the NBA and basketball. Don’t get me wrong, those with a love of the game will pick up on people and references that others may not. Cameos from legends including Dr. J, Shaq, Dirk, and Chuck to current stars like Trae Young, Aaron Gordon, and Tobias Harris – means generations of the NBA are represented. Throw in Mark Cuban, Brad Stevens, Doc Rivers, and Jay Wright and that expands even more to college and the front office. Zagar, Fetters, and Materne seamlessly weave Stanley, Bo, and co. into the modern-day NBA. While basketball junkies will get a kick out of Hustle, non hoops heads will have plenty to enjoy too. 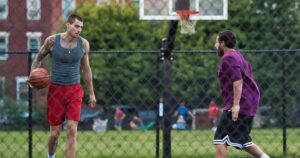 The acting in the film is fantastic from all involved. Sandler’s love of basketball is on full display. His portrayal of a down on his luck scout who doesn’t have much left in the tank is spot on. He brings an air of realism, and sadness, to the film – but with a glimmer of hope and strength. Sandler continues to show his versatility and at this point, his range should come as no surprise. He has made sports movies in the past, but he is well past The Waterboy and Happy Gilmore stage of his career. I love Sandler in his mid-20s, but I welcome this new era with open arms. The film doesn’t reinvent the wheel, and may have a small handful of sports clichés, but that doesn’t hurt the final product. Hustle is absolutely worth a watch for everyone, but fans of the game can’t miss this one.

Hustle is available in select theaters now and will be available June 8th, 2022 on Netflix.