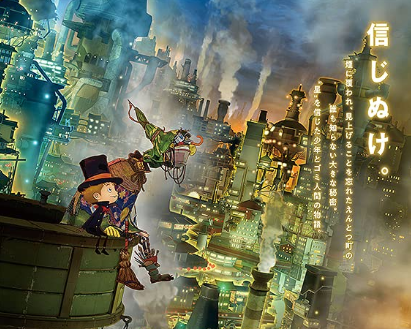 Poupelle of Chimney Town is a Japanese animated fantasy and is based on the picture book by Akihiro Nishino. It’s about a coastal and run down town that’s engulfed in thick smoke and darkness because of the mass chimneys that overcrowd and obscure the natural sky. Set around Halloween, the film opens with children dancing and singing their joy for the theatrical occasion. At the end of their celebration, the children remove their masks and unveil their collected spoils of the night. They noticed one individual had the heaviest bag of candy, who he had shared with a small child who’s bucket was practically empty but was also wearing the most impressive costume of the night.

Tattered cloth and broken trinkets that are normally thrown away have been upcycled into a unique costume so well done that the children wanted to greet the person who could make such art. Realizing that the mask can’t be removed, the children label this monster “Garbage Man” and demand it leave their town at once. It’s while searching for a safe place to hide, the garbage monster crosses paths and instantly befriends a small young boy named Lubicchi (voiced by Antonio Raul Corbo). Better than expected, this film brings to life a unique and inspiring tale about friendship, courage, hope, and perseverance to reach for the stars through an awe-inspiring adventure filled with whimsical characters, stunning animation, and notable performances. The English-language voice acting features the stellar cast of Tony Hale, Antonio Raul Corbo, Stephen Root, Misty Lee, and Hasan Minhaj.

Poupelle of Chimney Town is an artistically creative and beautifully detailed animated style reminiscent of (my personal favorite) Don Bluth films. Japanese animator Yusuke Hirota’s steampunk directorial debut is a vividly moving, accessible tribute to legacy, environment, and unexpected friendships while characters cope with a plethora of emotions and circumstances sustained from living in an isolated and dystopian existence. Lubicchi accepts this sentient being made of trash and gives it a name. Poupelle (pronounced poo-pell and literally translates to garbage/trash) Halloween and Lubicchi form an uncanny bond that is the primary focus of the film’s dark setting that touches on serious matters of capitalism, greed, tyranny, environmental wastelands, forgotten truths, and the devastation impacts it has on its people physically, mentally, and emotionally.

Lubicchi’s belief in his father’s fairytale stories about stars in the sky and his newfound friendship with Poupelle Halloween attracts the attention of soldiers called the Inquisitors. The Inquisitors are dressed like white birds that have been permanently grounded and are out to capture the duo who’ve been deemed a threat to society. The odd pair navigate through Chimney Town’s dark and dilapidated infrastructure to avoid being captured. From the underground to the highest of chimney tower peaks, they spark a bigger movement within themselves and the people of Chimney Town. Poupelle of Chimney Town is a delicate, heartwarming tale of detail and mature beauty that was a pleasure to watch. The film is a wonderful blend of the artistry styles of Don Bluth (Rock-A-Doodle, An American Tale, All Dogs Go to Heaven), the comedic charm of the Mel Brooks/Robin Williams 2005 film Robots, and includes a second chance opportunity similar to Michael Keaton’s underrated 1998 film Jack Frost. The dialogue can sometimes be repetitive however, that may be due to translation but overall, definitely worth a watch.

Poupelle of Chimney Town will release on Premium VOD May 3rd. The film will be available for digital download on May 17th and Blue Ray+DVD combo on May 31st.