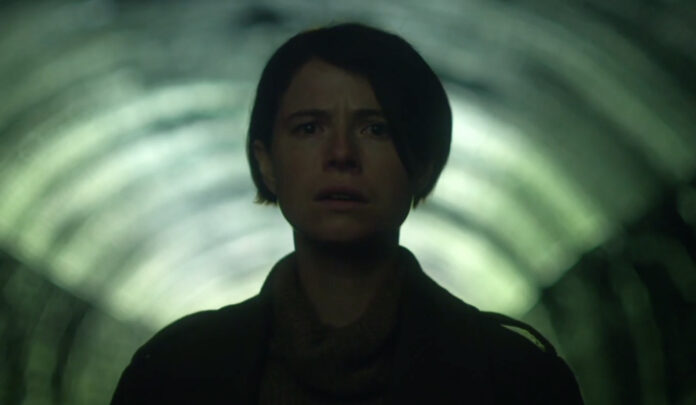 Say what you want about Alex Garland, director of Ex Machina, Annihilation, and his new horror provocatively-titled Men, but he definitely trusts his audience to figure stuff out on their own. But he’s also really deceptive about it, because initially his films seem simple on the surface. In the case of Men, what begins as the story of a woman who flees to the English countryside in the wake of her ex-husband’s brutal death, only to find that something is very fu**ed up in the neighborhood, becomes something wholly unfathomable. Garland is clearly saying something about toxic masculinity, hence the title, and the manner in which women exist in a male dominated world. I’m just not sure his ideas have been communicated as effectively here as in his previous work.

The always-great and expressive Jessie Buckley stars as Harper Marlowe, who has taken holiday in a small English town to get away from the recent past. The impetus for this flight from the city is her ex-husband James (Paapa Essiedu), and his recent death that she keeps reliving every time she closes her eyes. An argument between them, in which she expresses plans to divorce him, causes James to make terrible threats of self-harm in order to guilt Harper into staying. When he loses control and attacks her physically, she kicks him out of the house, only for his attempts to return to lead to his death, falling from the roof. Harper grapples with the idea that it might not have been an accident, but an intentional act designed to weigh on her mind forever.

So Harper has a ton of baggage coming in, and when she arrives at the manor and eats an apple right from the tree….”Forbidden fruit”, jokes the caretaker Geoffrey, played by Rory Kinnear as all of the men in this film are. Yes, if you are a Rory Kinnear fan this movie is for you because you get every sort of Kinnear you can imagine.  Geoffrey is making a joke…or is he? Is Garland toying with us here, too? It’s such a lazy horror trope that one hopes he’s being sly and self-aware. Honestly, Men is so uneven it’s tough to tell.

Harper finds herself terrorized by every man in the village, all with Kinnear’s face. Even a child, a rather unsettling child with a foul mouth, looks like the adult Kinnear. But what are they after? What supernatural, possibly cosmic abyss has Harper stumbled into?  These scenes of Harper being stalked are incredibly effective, visceral in the fear they cause in her being a lone woman in an unfamiliar place surrounded by strange men. Garland, who wrote 28 Days Later, Sunshine, and has conjured up terrors still too painful to think about, knows how to ratchet up our sense of dread.

Is it possible for Garland to make a movie as straight forward as Men appears to be? In its relation to the horror genre and real-life, women are constantly under siege by a barrage of different males. But they might as well be all the same, sharing the same face. Some are outright evil, toxic even, and they are easiest to spot even toughest to control. But others, like the kindly priest version of Geoffrey, who appears civil and even helpful in doling out sage advice, only to turn on Harper and blame her for her husband’s death. Those men weigh a much heavier psychological toll, and break down any trust a woman can form with the opposite sex.

When operating on a basic horror level, Men is wildly effective. Harper’s fear is genuine and the imagery around her an evocative mix of nature’s beauty and dangers. This is best realized as Harper takes her first walk through the natural brush, creating a haunting echo of music with her own voice. As the sound reverberates, she first encounters the nude, leafy version of Geoffrey. He stalks her from afar, all the way back to her home, and begins groping at the apple tree like Adam in the Garden of Eden.

It should be said that Kinnear is amazing, transforming like a chameleon into eight different versions of Geoffrey, including a sadistic child, various bar patrons, and so forth. Each one feels so different, and each time you see his face tattooed on a new body it sends a chill down your spine.

By now you may have heard about the wild, gonzo final sequence. Look, it’s just Goddamn insane but also so disconnected from the rest of the film that it reads as a serious creative fail. Without giving too much away, the various Geoffreys attack Harper but they prove to be pretty ineffectual. Whether that’s a statement by Garland on the ultimate weakness of toxic men is unclear, but it would make more sense than anything else. Then the men are born and reborn repeatedly from a giant vagina in an excrutiating sequence of unfortunate events. As far as body horror goes, Men isn’t the first to broach this disgusting territory, and its reasons for going there are unclear other than shock value. Garland has always left it up to the viewers to put the pieces together, to form conclusions on their own. But this is the first time that I can think of where the conclusion is merely to get people buzzing rather than to figure anything out.

Men opens in theaters on May 20th.