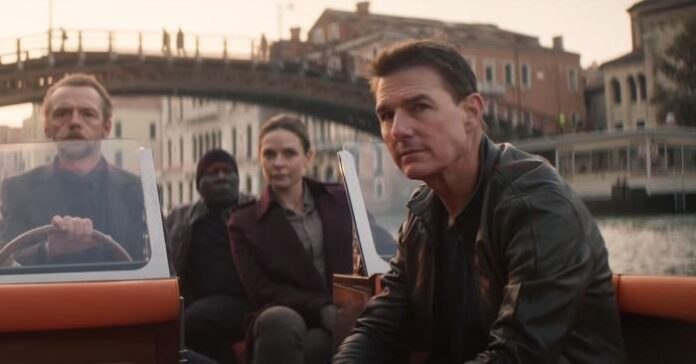 You probably saw, but the trailer for Mission: Impossible-Dead Reckoning Part 1 leaked onto Twitter over the weekend. Oops! It was viewed probably millions of times before being taken down, but Paramount has dropped it officially now because at this point, why wait to show off Tom Cruise’s latest adventure as IMF agent Ethan Hunt?

The first in a two-part epic, both directed by Christopher McQuarrie, Dead Reckoning finds Cruise joined by familiar faces from the past. Of course, Ving Rhames is going to be there because he’s the only one other than Cruise to be in every movie, but so is Simon Pegg, Rebecca Ferguson, and Vanessa Kirby from Mission: Impossible-Fallout and Henry Czerny from the original movie in 1991.

Also along for the ride is Hayley Atwell, who hopefully will get to slug it out with Ferguson and Kirby in a triple threat match. Guardians of the Galaxy‘s Pom Klementieff is there, too, so maybe turn it into a fatal four-way? Cary Elwes, Shea Whigham, and Mark Gatiss co-star, as well.

And based on the footage here, we’re going to see a lot of people running, car chasing, sniping things, conjuring up keys, and Cruise taking control of the desert. He might also jump off of a mountain, as Cruise is wont to do. There’s also a lot of Czerny’s Kittredge in this trailer, which makes me think he’ll rip off his face to reveal he was someone else the entire time.

Unfortunately, we are more than a year away as Mission: Impossible-Dead Reckoning Part 1 opens July 14th 2023, with Part 2 arriving June 28th 2024.