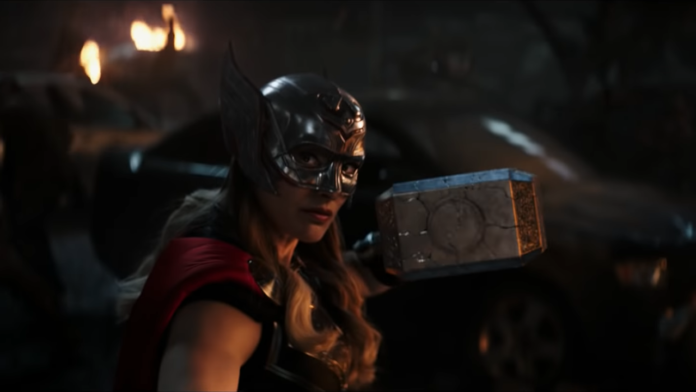 If you follow film Twitter then you have probably seen #ThorLoveandThunder trending for, oh, about two or three months. Fans have been expecting this trailer to drop for ages now, openly pleading with Marvel to do it during the build-up to Spider-Man: No Way Home and after. But it was like Marvel was toying with them, when in truth they were probably just focused on Doctor Strange. Well, the time has finally come. The teaser for Thor: Love and Thunder is here and it’s even crazier, but also more awesome, than expected.

You knew this was going to be wild because it followed on Thor: Ragnarok, which fans loved so much that Marvel granted a solo franchise its fourth movie for the very first time. This teaser doesn’t disappoint. It picks up with Thor who was last seen hanging out with the Guardians of the Galaxy…he was also really fat. But we see him growing disenchanted with the whole superhero thing, and also working himself back into shape in the shadow of Surtur’s corpse. Nice. But we also get to Thor hanging out with his rocky pal Korg, once again voiced by returning director Taika Waititi, and Tessa Thompson’s very bored-looking Valkyrie, who is probably sick of running things at New Asgard.

And of course, there’s that whole Natalie Portman’s Jane Foster becoming Mighty Thor. They don’t disappoint in showing us that, either.