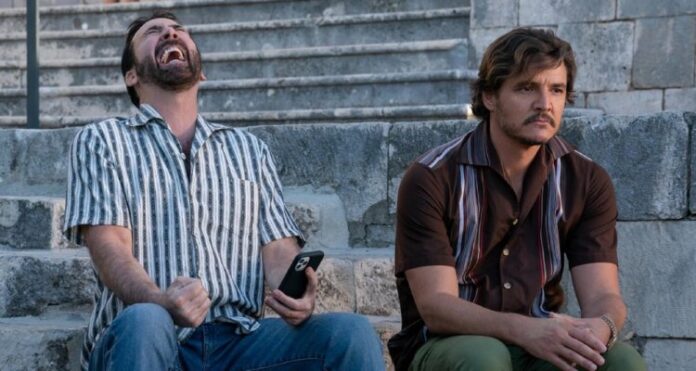 I don’t know anybody who dislikes Nicolas Cage. There’s a reason for that; I don’t wanna know anyone who dislikes Nicolas Cage. Suffice it to say, I’m the target audience for Tom Gormican’s The Unbearable Weight of Massive Talent, which can charitably be described as Nicolas Cage in his ultimate final form, like he’s Goku in Dragonball, or Voltron with all five lions. This wild, meta experience features Cage playing himself, playing his younger self, and also his older self making out with his younger self. And that’s just the tip of the weirdness scale. If you love Nicolas Cage, this movie isn’t just for you, it is required viewing if you ever hope to feel fulfilled.

The Unbearable Weight of Massive Talent is a lot of different things, most of which it does extremely well. Buddy comedy, action flick, family drama, crime film, and best of all a meta examination of the unique place Nicolas Cage holds in the Hollywood landscape and with his fans. Cage fits into this bizarre space where he’s a respected actor, but has also done so much crap that when he does something like Pig it feels like a comeback. And yet he’s also this cult icon whose plethora of unforgettable roles practically will a movie like this into existence. You can’t make this movie about any other actor. This one is pure Cage.

The premise is simple enough although it grows more convoluted along the way. Cage, playing a highly-stylized version of himself, has lost his way as an actor.  He’s still got the moxie to leave a director slack-jawed at his on-the-spot reading for a major role he wants, but doesn’t have the juice to actually win said role. In actual interviews, Cage has talked about how acting keeps him grounded and focused, and the film plays into that real-life part of him the way it does so many other things. True Cage aficionados won’t miss a single beat. With the work drying up, a massive debt looming over him, and eroding relationships with ex-wife Olivia (Sharon Horgan) and his teen daughter Addy (Lily Mo Sheen), Cage takes a lucrative $1M gig hanging out with a superfan. That fan is Javi Gutierrez (Pedro Pascal), who wines and dines the actor and fawns all over him. It’s a situation Cage isn’t into, but the two bond over, what else, their mutual love of film…and one particular film with a beloved marmalade sandwich-loving bear. But soon after they become friends, Cage is roped into a CIA operation led by agents Vivan (Tiffany Haddish) and Martin (Ike Barinholtz) who say Javi is actually head of a criminal organization. They need Cage’s help to take Javi down, and the only way he can think to do it is by convincing Javi to join him in working on an original screenplay.

Of course, this all goes quickly out of hand, with Cage not only suffering from a crisis of confidence but actual delusions. There’s more than one Nicolas Cage, the present-day version and the younger “Nicky” version, who is the crazy, unfiltered Cage ala Wild at Heart, showing up to punch the old guy in the ribs every now and then.

The cool thing about The Unbearable Weight of Massive Talent is that you can feel the Nic Cage love from Gormican and co-writer Kevin Etten. As if Cage wasn’t already the most meme-worthy actor alive, this movie has possibly generated a thousand more including the epic “Nic Fucckkkiiiinnnnnggggggg Cage” primordial scream that will outlive us all. Gormican and Etten keep the Cage references pretty simple: Con Air gets plenty of callbacks, as well as Face/Off and…Captain Corelli’s Mandolin??? Hey, it’s apparently underrated or something. While it’s clear everybody involved idolizes Cage, it doesn’t mean he’s free from being the butt of jokes, especially for the ” nouveau-shamanic” acting style he preaches. It would’ve been nice to see the writers go deeper when referencing Cage’s filmography, though. There’s a pretty badass man cave that Javi owns which is like the Nic Cage Hall of Fame for Superfans, but in terms of direct callbacks I could’ve used more Raising Arizona, more Leaving Las Vegas, etc.

Everyone surrounding Cage is fully on board with this nutty roller coaster of a flick. While Cage has long since embraced such weirdness, we get to see Pascal roped into this loopy buddy comedy. He and Cage have incredible bro-chemistry; I’d pay to see them do a Face/Off style action flick together someday. But Sharon Horgan can’t be overlooked, either, as Cage’s foul-mouthed ex who isn’t afraid to drop a few truth bombs on his head. There’s an emotional core to the film, that of Cage’s struggles to connect with his daughter, to introduce her to something that he loves while respecting her as an individual, all while balancing fatherhood with fame. It works a Hell of a lot better than the subplot involving the CIA, which gives Haddish and Barinholtz (reuniting from truly underrated comedy The Oath) little that adds value to the main plot. Also, while Gormican clearly has a passion for this project, it’s clear that directing action is not his thing. He’s not terrible, but for a movie that is so full of indelible moments it’s mainly the dialogue that pops, not the imagery which is workmanlike at best.

I’ve met Nicolas Cage, interviewing him a few years ago for Mandy. The version of him on screen here is like the tiniest fraction of who he really is. The part that rings the truest is the cinephile, the guy who is eager to talk movies with anybody and once he gets started it’s tough to make him stop. I feel like The Unbearable Weight of Massive Talent is a movie that not only Nicolas Cage’s fans will want to talk about endlessly, but Nicolas Cage himself will look back on it with pride that his career inspired something that so many are going to enjoy.

The Unbearable Weight of Massive Talent opens in theaters on April 22nd.

‘Dream Scenario’: Nicolas Cage And Ari Aster Team For New Comedy At A24