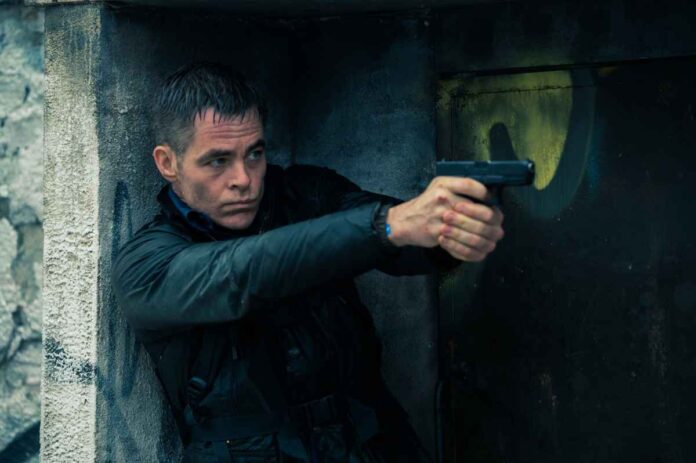 Swedish filmmaker Tarik Saleh’s English-language debut, The Contractor, resembles the brawny action flicks that would have been popular in theaters just a few years ago. It’s an interesting entry into the American market for him, but also an unsurprisingly strong reunion of Hell or High Water duo Chris Pine and Ben Foster, who reunite for another tale of masculinity and brotherhood, albeit in a more military setting. I would’ve liked to see how this would perform on the big screen with a national rollout, but when struggling studio STX sold the rights to Paramount and Showtime that went out the window.

This is ultimately Pine’s movie and it’s one of the best star vehicles for him since…well, Hell or High Water. He plays James Harper, a special forces officer who is drummed out of service for self-medicating, something he did just to stay in top physical shape for the grueling job. Adrift, and with a wife (Gillian Jacobs) and kid (Sander Thomas) to support, James will do anything for work. This isn’t just lame setup stuff, either. They could’ve made a movie out of James’ plight and his struggle to get back on his feet, and we are immediately sympathetic to him. Fortunately for James, he hooks up with his former superior and best friend Mike (Foster), who is living it up as a private contractor, working under the command of a grizzled veteran (Kiefer Sutherland) who knows all too well how the government chews up and spits out decorated soldiers like them.

James is gung-ho for the work, and soon he and Mike are part of a team deployed to Berlin to take out a lab run by a scientist (Fares Fares) who is supposedly designing bioweapons for terrorists. The operation turns into a shit show, James is forced to do things he doesn’t want to, including engaging in a shootout with local cops that ends in a stacked body count.

The hiring of Saleh to shoot such an American-style film is a sneaky move. The Contractor may look and sound like a generic action flick, but it isn’t. Pine’s character isn’t an invincible Arnold Schwarzenegger type; he’s disillusioned and has weaknesses, and he takes a physical and emotional beating. He has lost faith in the system that played on his patriotism and turned him into a killer; and he has been forced to question the men around him that he once knew as brothers. Pine is excellent here in depicting James’ confusion, frustration, and weariness as the attacks on him come from all sides and are relentless.Although there is quite a lot of action to chew on, the balance with character-driven drama is on point.

There are few moments to stop and catch your breath. One of the better ones involves the great Eddie Marsan as a safe house field agent who likes to share some of his own war stories. These times are brief and feel like a lull designed to lower your defenses to the bloodshed that’s soon to come. I wish there could have been more for Foster and Jacobs to do, but they are solid in roles that don’t require a lot. Foster is basically channeling the same attitude (and beard, I think) that he sported in Lone Survivor.

The Contractor ends on a blazing gun battle and assault, but even then there are moments of reflection. Although its conclusion isn’t as ambiguous as Extraction, it does seem to be setting up something for the future. Assuming it does well, we could be looking at the unexpected start to a new franchise for Pine, who I continue to believe is better at smaller projects like this where he is the emphasis, rather than big studio blockbusters where he can be lost in the shuffle.

The Contractor is available in select theaters and VOD now.