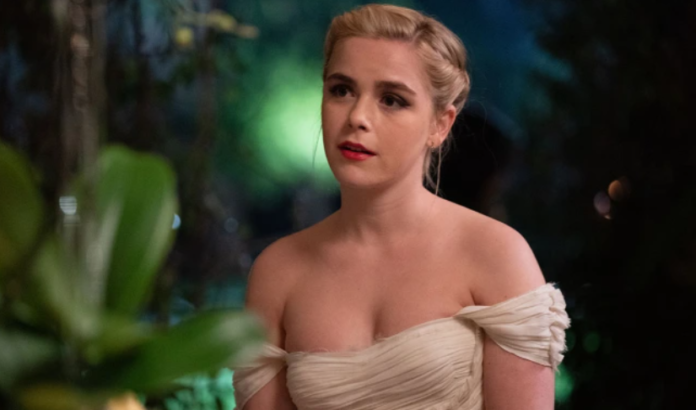 Swimming With Sharks is a psychological thriller and gender swapped remake of George Huang’s 1994 dark comedy film of the same title name. The original film featured Kevin Spacey as a media mogul who’s reputation of douchebaggery and torment of his assistant leads to devastating circumstances that are madley driven by male dominated ego, obsession, and power. This latest version is created and written by Canadian actress and writer Kathleen Robertson (Beverly Hills 90210, Splendor) and directed by Tucker Gates (Homeland, Alias). They have previously worked together on Bates Motel. Originally developed for the short lived streaming app Quibi, Swimming With Sharks is currently launched as a Roku Channel original series. The series includes six 30 minutes episodes that dares to poke the ‘Hollywood Bear ” by exposing its darker side through a female perspective that is largely influenced by the 2006 (and still ongoing) ‘Me Too’ Movement. This revised dark comedy is a soft erotica series led by the powerhouse performances of seasoned actors Diane Kruger (National Treasure films, Inglourious Basterds) and Kiernan Shipka (Madmen, Chilling Adventures of Sabrina). Donald Sutherland, Thomas Dekker, Finn Jones, Erika Alexander, Ross Butler and Gerardo Celasco round out the incredible cast.

“We do what we have to do in order to get what we want”. This infamous quote is uttered by Lou Simms (Shipka) and Joyce Holt (Kruger) simultaneously as the first episode comes to an end and plainly sets the tone for what is expected to come throughout the rest of the series. Fresh out of Colorado Springs donning braided hair and southern style sundresses, Simms starts her internship at Hollywood studio, Fountain Pictures. She appears to be just another naive newcomer who could be terminated for any reason at any time and is told as such. However, her anything but innocent demeanor quickly morphs into a dark and unstable persona that hastily chops at Simms truest intentions. Joyce Holt (Kruger)  is Fountain Pictures first female CEO and is notorious for demands. The studio is owned by Redman (Donald Sutherland) who is dying of cancer and plans to leave the studio to Joyce as long as she agrees to maintain his (to put it politely) piece of shit ways. She agrees but is growing impatient of his slow demise and begins to negotiate her own plans outside of his ‘desired expectations’. Meanwhile, Joyce and her husband are desperately trying to conceive a child. The stress and frustrations of her cutthroat career, pregnancy trials, and her marriage cause her to form a closer but complicated connection with Simms. Simms is willing to do and give anything to Joyce but her mental instability gets wildly out of control the closer she gets to her female idol. 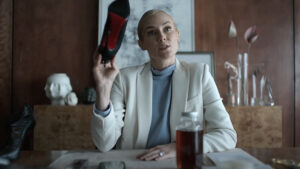 Swimming With Sharks is not shy about exposing the dark side of the Hollywood studio system and the “forced under the table” detriment it can have on people, especially women within the industry. Shipka and Kruger are a perfectly matched pair of leading women who embrace their performance and roles who’s chemistry when together exudes a very Wild Things (Neve Campbell, Denise Richards) kind of vibe. The series episodes are short and sweet but the script writing and editing came across as choppy and under developed. There’s a few eye popping scenes that are admittedly impressive but the show can’t pass what feels more like a 90’s high school drama. Costumes, hair, makeup, overall performances, even a female dominated soundtrack are cute and fitting but the timing seems off, almost… behind. Important nonetheless, however the lack of a robust storyline of this series is easily forgettable. The first episode is promising in the sense that the show could have the potential to dive in deep with each character from where they started to how they end up. There are fragmented details that act as key components and appear to be of importance or relevance but exclude elaboration or explanation. There’s a curious attraction to want to see more but each episode ends as an underwhelming disappointment. Not a bad series for Roku to launch considering the cast and revamped take, however, Swimming With Sharks is like riding on a roller coaster with no twists or turns. It goes fast and you may see some things you like but the ride itself is short, unexciting, and easily forgettable.

Swimming With Sharks is streaming now on The Roku Channel.