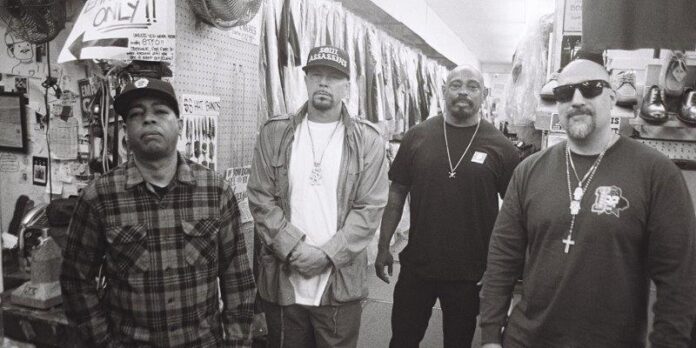 Of course, a documentary of legendary hip-hop group Cypress Hill would premiere on the national stoner’s day (4/20). Showtime knows what they are doing!

In the 90s, hip hop was truly hitting its stride. Branching from a NY-based artform out west and was starting to become the mainstream musical genre that has captivated the globe today. As hip hop moved out west, a new group of artists started to grow and become popular. While most people associate the West Coast with NWA and many other rappers that have spawned from the “gangsta rap” sub-genre, we can’t ignore the impact that Cypress Hill has had on the music. They had a unique sound, spoke about the streets, and really loved to talk about weed. Their impact on rap, pop music, and even rock music is very hard to ignore. In Showtime’s latest documentary Cypress Hill: Insane in the Brain, we are treated to their superhero origin story and how they became the titans in hip hop.

Shot by video director Estevan Oriol (who himself has an extensive resume that not only includes music videos, but the documentary LA Originals), who chronicles the history of the famed rap group, who in addition to directing music videos for Cypress Hill, he also was a photographer and has extensive photographs of Cypress Hill, from their early days to the present. Cypress Hill: Insane in the Brain not only interviews members of the group (Sen Dog, B-Real, DJ Muggs, and Eric Bobo), but other members of the hip hop community (Ice-T, Chuck D, and many others), and even has Cheech and Chong chime in on Cypress Hill’s marijuana activism (that they said they inspired).

One thing that was very interesting was that DJ Muggs was not Latino. I honestly went my whole life of fandom thinking he was Latino and not an Italian from Queens who moved to the LA area young in his life. B-Real had been involved in gang life and after surviving a gunshot, teamed up with Muggs and Sen Dog (who happened to live on the same Cypress Ave street (hence the group’s name) in the South Gate community in Los Angeles as B-Real) and they started to try and give hip hop a serious try. Another unique thing that was revealed in the documentary, B-Real’s signature nasaly rap style that he’s so famous for was not how he originally sounded. Only have multiple sessions did he realize that he needed to give his voice a unique sound, and from then on B-Real’s voice became so unique and pronoun.

Everyone in the group quit their jobs and worked on making music nonstop for months. When they finally had a demo and shopped it around, no one wanted to sign them. It was only Ruffhouse Records (who also were a small record label at the time) that gave them a chance. Cypress Hill: Insane In The Brain also highlights how impactful Ruffhouse Records were. We forget that they are responsible for such artists as DMX, Kool Keith, Kris Kross, Schoolly D, The Fugees, and countless others. They are just much of a hip-hop institution as Cypress Hill!

Even with their self-titled album debut, they didn’t blow up. Cypress Hill gives that credit to their song “Shoot ‘Em Up” which was on the soundtrack to the movie Juice. Even though the song only played for less than a minute in the movie, that was all the time they needed to turn into household names. From there, they started to change the game for hip hop. In addition to such classics as “How I Could Just Kill A Man,” “Hand on the Pump,” “Insane In The Brain” and countless others, Cypress Hill were ahead of their time when it comes to their quest to legalize marijuana.

The documentary makes a point that in hip hop, marijuana was a taboo subject. Estevan Oriol even plays NWA’s “Express Yourself” when Doctor Dre raps that he doesn’t smoke because it’ll “give a brotha brain damage” (even though Dr. Dre eventually made “The Chronic,” which was pretty much dedicated to weed) to showcase that hip hop used to be anti-weed once upon a time. Nowadays, you can’t even fathom that hip hop and weed aren’t tied together at the hip, and we can thank Cypress Hill for their flamboyant use of marijuana and their constant songs referencing it. This was way before the semi-gray legalization we currently have in many states, so even them just smoking on stage at a concert was an act of protest and of politics. They literally would sneak weed across the border when performing internationally. Cheech and Chong highlighted that Cypress Hill continued their quests for mainstreaming marijuana use from their movies and took it to another level. Cypress Hill’s activism also made them permanently banned from Saturday Night Live after defiantly smoking weed on stage during one of their performances. While it doesn’t seem like a big deal today as marijuana is mainstream (sometimes), it was a big deal for them to have that stance during the 90s and 2000s.

Another item that Cypress Hill: Insane In The Brain highlights is the group’s ability to constantly evolve and change to remain fresh. Besides OutKast, there really hasn’t been a hip hop group that has managed to reinvent themselves in each subsequent album, which has allowed them to have longevity in a business where some acts come and go. Embracing their Latin roots, they would put out albums exclusively in Spanish. They even put out a rock album and gained a new audience in the process. They eventually added former Beatie Boys percussionist Eric Bobo (they “stole” Bobo from the Beatie Boys), who was the son of famed Latin Jazz musician Willie Bobo, and then had an even more diverse sound for their music.

As with any music group, there’s always that phase where the artists break up. Sen Dog fell out of love with performing and simply left the group. In the process of finding himself, he created a motorcycle gang and became very in tune with rock and biker culture. DJ Muggs also made his own solo albums. However, unlike many other groups, Cypress Hill never had animosity toward each other. B-Real has said countless times through archived interviews that Sen Dog could come back any time he wanted. No matter what happens on the business side of things, they remained a family.

Cypress Hill: Insane in the Brain is an impressive documentary. Even if you aren’t a fan of their music, the sheer archival footage transports you to a few decades ago and we get to see a group of friends struggling to get into the rap game, and then eventually become so big that they get a star on the Hollywood Walk of Fame. Estevan Oriol delivers on getting new people to understand Cypress Hill, and longtime fans get to see their triumphs to becoming one of the greats in hip hop.

Cypress Hill: Insane In The Brain premieres today, 4/20, on Showtime.