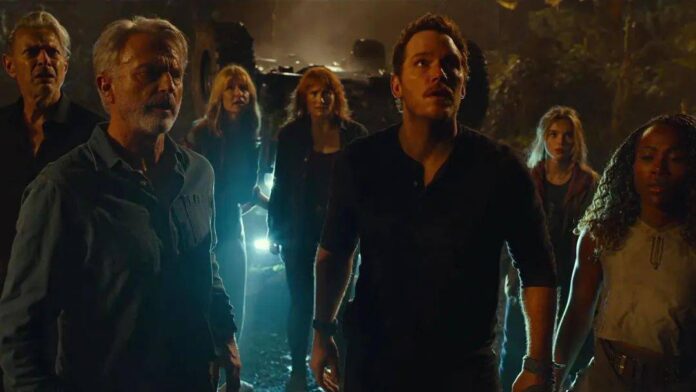 Is Jurassic World: Dominion truly “the end of the Jurassic era”? Universal might be using that as a way of teasing the end of the latest trilogy, and the sixth movie in the franchise overall. But come on, these things are like printing money. Even the previous film, 2018’s Jurassic World: Fallen Kingdom, made $1.3B. That kind of money tells me that we haven’t seen the last of “dinos gone wild.”

Dominion promises to be the biggest of them all, though. Not only do we get the current crew led by Chris Pratt and Bryce Dallas Howard, but they get to form an Avengers-like teamup alongside the O.G.’s; Sam Neill, Laura Dern, and Jeff Goldblum.

While the the threat is great, the emotional core is Chris Pratt’s Owen and his connection to his raptor pal Blue. It’s up to Owen and his friends to save Blue’s baby, in a world that finds dinosaurs existing side-by-side with humans.

From Jurassic World architect and director Colin Trevorrow, Dominion takes place four years after Isla Nublar has been destroyed. Dinosaurs now live—and hunt—alongside humans all over the world. This fragile balance will reshape the future and determine, once and for all, whether human beings are to remain the apex predators on a planet they now share with history’s most fearsome creatures.