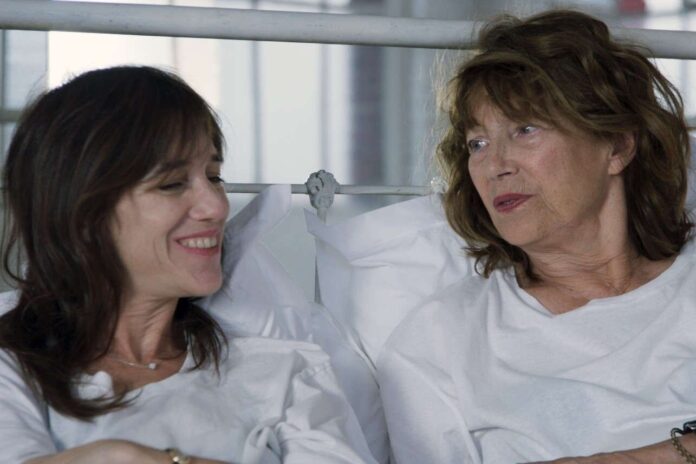 “The idea is to look at you as I never have before or have dared to look at you. Filming you with a camera is basically an excuse just to look at you,” actor and now documentarian Charlotte Gainsbourg tells her mother turned subject Jane Birken in Jane by Charlotte. Birkin has certainly been seen throughout her career, known as a French pop singer, model, and actress. The infamous and expensive Birkin bag was named after her. But for all that’s known about the 75-year-old, her daughter’s portrayal of her has us see her in a new light.

The film might be a daughter’s attempt to better see her mother’s life and work, but what it morphs into is a cross between a character study and a portrait of parent and child. Told through family visits, interview questions, and home-video. Often the footage is mundane, from Birkin gardening with Gainbourg’s youngest child to visiting a bulldog breeder, to exploring Japan after a performance. We see the two contemplate their relationship, Birkin calling her daughter an “intimidating child”. They are cautious with each other but reflectively honest.

Though Jane by Charlotte is her first feature film, Gainsbourg has made a name for herself in the past 35 years, appearing in blockbusters (Independence Day: Resurgence), independent dramas, and a large number of Lars Von Trier films (Antichrist, Melancholia). All of that Hollywood and legacy is stripped away here, leaving a raw portrayal of mother and daughter. While the Gainsbourg interview-style feels formulaic at first, it cuts to the core of how Birkin sees herself and the world around her. Exposition and her mother’s history are not conveyed in any other way. As a director, Gainsbourg does not wait for her audience to catch up, she doesn’t spell out her mother’s past. In a way, this technique feels more personal narratively.

Visually, Jane by Charlotte’s raw and blue-hued aesthetic feels lived in and subdued. It works for the film, letting Birkin speak for herself. Musically, Gainsbourg uses her own songs throughout the film. By sound alone, this feels like an odd choice for a documentary as her music has an edge to it. However, when juxtaposed with the use of her mother’s music, the film becomes a fully realized portrait.

Towards its end, the film’s thesis statements start to blend together, its scope more narrow. Clearly a passion project, Gainsbourg’s vision, though beautiful and moving, doesn’t quite know who its audience is. Is it for the casual viewer? The Birkin fan? The Gainsbourg fan? Could it be the director herself? Either way, Jane by Charlotte’s way of portraying a parental figure is fascinating.

Jane by Charlotte is now playing in New York. It will open in Los Angeles on March 25, with more cities in April. It will be available on VOD May 6