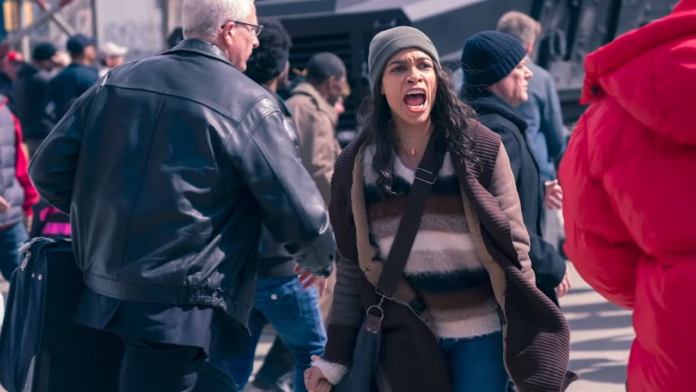 Can there ever be enough Rosario Dawson? Truly, if you’re a fan of hers (and who isn’t??), there are no shortage of places you can see her regularly, whether it’s on The Go-Big Show, Dopesick, episodes of The Mandalorian, The Book of Boba Fett, and her upcoming Ahsoka series on Disney+. And oh yeah, she’s also starring in the anticipated HBO Max limited series, DMZ, based on the popular DC Comics graphic novel.

Coming our way from producer and director Ava DuVernay and Westworld exec-producer Robert Patino, DMZ is set in the near future in the wake of a Second Civil War that has turned Manhattan into a demilitarized zone between the United States of America and secessionist Free States of America. Dawson plays fierce medic Alma Ortega, who saves lives while constantly searching for the son she lost at the start of the conflict.

In the near future, America is embroiled in a bitter civil war, leaving Manhattan a demilitarized zone (DMZ), destroyed and isolated from the rest of the world. Leaping off the pages of the popular comic, “DMZ” chronicles the harrowing journey of fearless and fierce medic Alma Ortega (series star Rosario Dawson), who sets out on a harrowing journey to find the son she lost in the evacuation of New York City at the onset of the conflict.

Throwing gasoline on the flames of that conflict is Parco Delgado (series star Benjamin Bratt), the popular — and deadly — leader of one of the most powerful gangs in the DMZ. He wants to rule this new world — and will stop at nothing to secure that outcome. In this adrenalized and expansive drama that examines a stark political and cultural divide in American society, Alma must contend with the gangs, militias, demagogues, and warlords that control this lawless no man’s land. In doing so, she becomes the unlikely source of what everyone here has lost: hope.