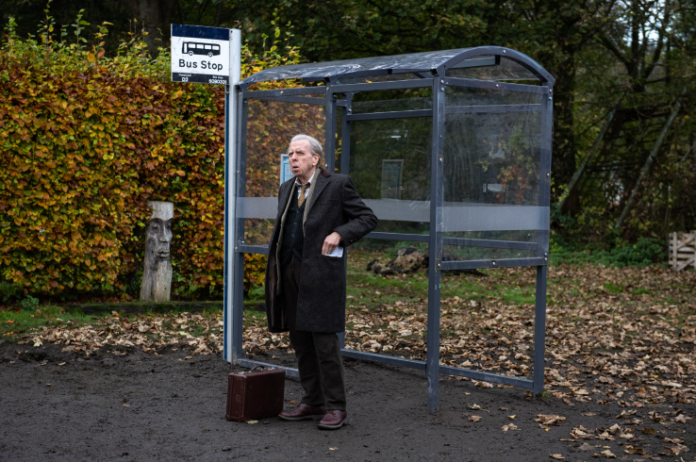 Timothy Spall stars in a new age drama The Last Bus that tells the story of 90 year old and recently widowed Tom Harper. Spall has a knack for talent and portraying unique characters that fans adore. They love his villainous work of playing Peter Pettigrew in the Harry Potter Franchise, Beadle in Sweeney Todd, and has recently been seen starring alongside Kristen Stewart in Spencer. In this film, Spall takes on the role of an older gentleman with little time left to live and is desperate to keep a promise he made to his wife Mary (Phyllis Logan, Downton Abbey) before her passing. An enjoyable aspect of the film is the past and present timelines that give the greatest insight to who Tom (Spall) is and what his intended mission/purpose is to fulfill. The film holds a charming appeal stemmed from loss and heartbreak that Spall cautiously but beautifully wraps around his finger. The Last Bus is directed by Gillies MacKinnon (Whisky Galore), written by Joe Ainsworth, and distributed by Samuel Goldwyn Films.

Young Tom Harper (Ben Ewing) and Young Mary (Natalie Mitson) have left their home in England with a dark and unhappy metaphorical cloud looming over their heads. Flashbacks dance back and forth of their transition from old to new life. I loved that there is a brief scene where Tom and Mary’s past and present selves passed each other on the street. Present Tom and Mary are grief stricken with the news that the inevitable is happening sooner rather than later. Once that time comes and given that he’s not far behind either, Tom sets out to do what he’s wanted to do for a long time. Tom later reveals that he wanted to take his wife on that venture before her passing but she never wanted to go back to the place they abandoned so long ago. Knowing her time is running dangerously low, admits to Tom (Spall) that she regrets not going back home and is heartbroken that it’s too late for her to go. Upon her death, Tom musters up the last bit of everything he’s got left and sets out on an epic journey from a remote Scottish village to England’s most southern point, Land’s End in Cornwall. Tom has a free bus pass and intends to travel only on buses just to keep a promise he made to his beloved wife.

Life is a journey and The Last Bus takes our old soldier, 90-year-old Tom Harper (Timothy Spall) out to conquer a mission no matter what obstacles he faces along the way. Battling against time, age and fate, Tom embarks on an odyssey, revisiting his past, connecting with the modern world and a diverse, multicultural Britain he has never experienced. I loved the color scheme throughout the film. Earthy gray tones seemed reflective to the functionality of ‘life’s gray areas’ when dealing with grief/trauma. A rich yellow, reminiscent of sunshine appears on Mary’s character and at times when she is truly at her happiest. The color yellow can be seen again when Tom pulls out the tin of her ashes and it’s wrapped in what he lovingly clutches as her yellow scarf. I loved the concept of the story and the way the cinematography captured the brilliant essence of Tom’s overall lifeline. He’s without a doubt a man determined to see his promise through and that is an admirable feat. The only thing I didn’t care for is the incorporation of the whole phone-viral trend thing. I get it, it’s the norm of this generation but it doesn’t necessarily fit into certain stories, like this one. The clash of this emotional love story and “hashtagging” Tom’s journey felt tacky and forced. Maybe that’s the boomer in me but it is what it is. Other than that, The Last Bus is a decent film about love, loss and the human spirit. A film that reminds us we are not alone – and that whether we like it or not, we’re all on this ride together.

The Last Bus will release in US theaters and VOD platforms on February 18th.