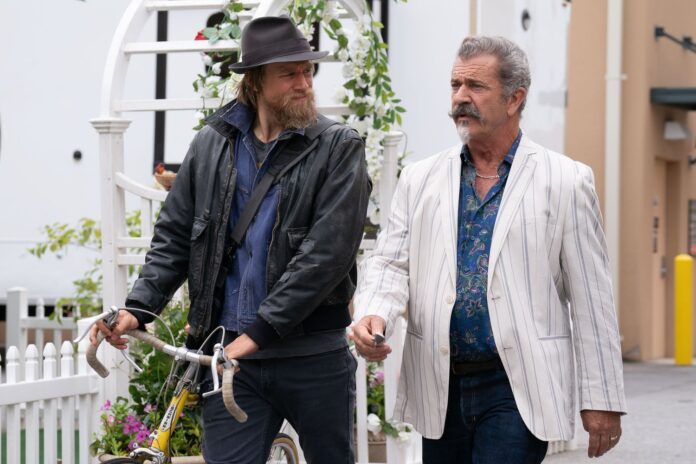 Charlie Waldo (Charlie Hunnam) is living a quiet and solitary life in the hills outside of Los Angeles. Once a decorated LAPD officer, Waldo made a mistake that he could not forgive himself for. The only reasonable solution was to leave town, get rid of all his belongings but a chosen 100, and live in a trailer with a chicken. His peaceful existence comes to an end when his ex-girlfriend Lorena Nascimento (Morena Baccarin) pays him a visit. A famous actor, Alastair Pinch’s (Mel Gibson), wife was murdered and he is the main suspect. Pinch is a cash cow for the studio, so of course studio exec Wilson Sikorsky (Rupert Friend) can’t lose him. Sikorsky hires Lorena to solve the case, preferably proving Pinch’s innocence. Lorena immediately realizes that she needs the help of the best detective she knows, Waldo. 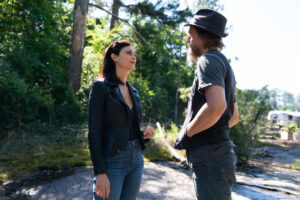 Waldo is hesitant at first, not wanting to get involved and put himself back in the absurdity that is LA. Then Waldo gets word that Lorena is missing. That coupled with a visit to his trailer in the middle of the night by Swag Doggg (Cliff ‘Method Man’ Smith) sways him. Swag Doggg and his men threaten Waldo and show him an article claiming he was on the case. Waldo bikes down to the studio to set things straight and get off the case. Sikorsky and Pinch work their magic and before he knows it, Waldo is back in the thick of things. As Waldo dives deeper into the murder, he encounters more twists and turns than he expected. From the mysterious Kindergarten teacher Miss White (Lucy Fry) to the boisterous Don Q (Jacob Scipio) and his bodyguard Nini (Deacon Randle), Waldo tries to piece together what happened that night. Last Looks is directed by Tim Kirby. The film is written by Howard Michael Gould’s who based it off his novel of the same name. Last Looks is the first of the three-part Waldo series, so there is a chance for more films to follow. I haven’t read any of the books, but I cannot get enough of Charlie Waldo. Until there are more films coming, I will be sure to pick up the novels. Last Looks is a joy from beginning to end. Kirby and Gould build a hysterical and interesting world that Waldo is plunged into. The ludicrous characters that Waldo encounters, not to mention himself, help make the film lively and entertaining. 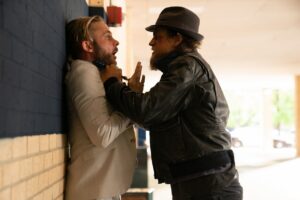 Gould’s script is outstanding, and the dialogue keeps the film flowing. Kirby’s blend of unique shots and close ups help set the tone. While Gould’s script brings the laughs, there is plenty of subtle humor to be found throughout. Kirby adds small touches in the backgrounds of shots and amongst the characters themselves that hit the mark. The twists do get a little muddled as the film progresses. There is a story line, maybe two, that didn’t need to be crammed in. However, this doesn’t detract enough from Last Looks to be too much of a hindrance. Hunnam and Gibson’s performances, with Hunnam paving the way, are fantastic – but everyone shows up. The entire cast seems to have embraced the absurdity and welcomed the chance to play these comical characters. A fantastic script coupled with crisp direction and top-notch performances make Last Looks one hell of a ride.

Last Looks is available in theaters and digital now.