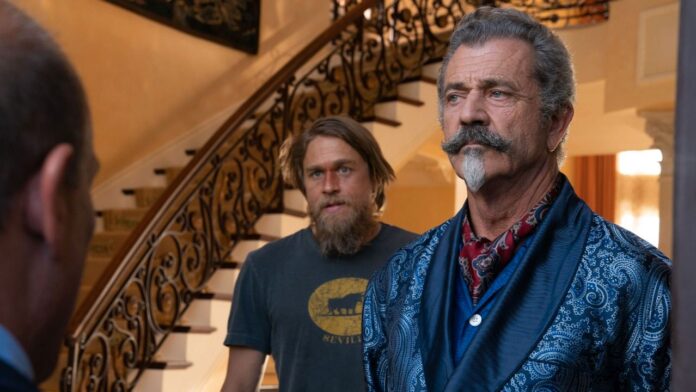 Murder mysteries are all the rage right now, but only one has Mel Gibson playing an eccentric actor (don’t hurt yourself stretching so far, Mel!) and the prime suspect. Last Looks (originally titled Waldo) stars Gibson alongside Charlie Hunnam and Deadpool actress Morena Baccarin, and with a healthy dose of Hollywood hijinks this looks like a lot of fun.

The film is directed by Tim Kirby (Brockmire) and has a cast of recognizable faces including Rupert Frien, Dominic Monaghan, Lucy Fry, Method Man, and the ubiquitous Clancy Brown. Here’s the synopsis:

Charlie Waldo (Charlie Hunnam) is an ex-LAPD superstar who left the force and now lives a life of simplicity and solitude deep in the woods. Alistair Pinch (Mel Gibson) is an eccentric actor who spends his days drunk on the set of his TV show. When Pinch’s wife is found dead, he is the prime suspect, and Waldo is convinced to come out of retirement to investigate what happened. The case finds Waldo contending with gangsters, Hollywood executives, and pre-school teachers, all in pursuit of clearing Pinch’s name … or confirming his guilt.

Last Looks will hit theaters and VOD on February 4th.