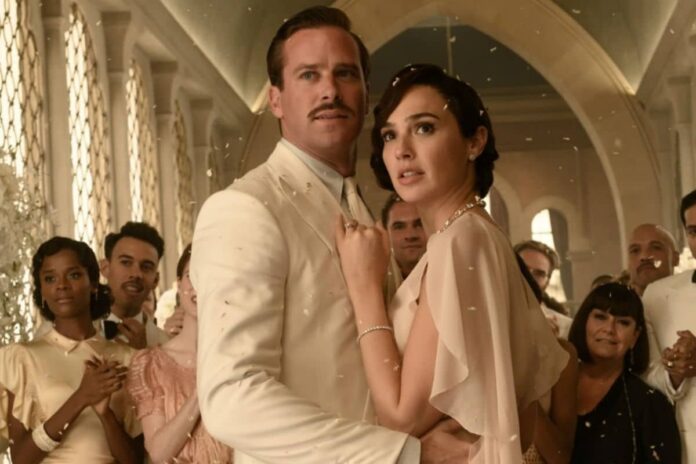 The opening moments of Kenneth Branagh’s Death On the Nile resemble an extra scene from his Oscar-contending drama, Belfast. Shot in black & white, the camera dives, unbroken, through a WWI foxhole where a young Hercule Poirot (Branagh, de-aged), uses his keen analytical skills to map out an attack strategy that saves his unit from a likely suicide mission. It doesn’t save Poirot from an exploding mine, however, causing severe scarring to his face. That’s when the love of his life Katherine (Susanna Fielding) suggests an easy solution to hide the disfigurement: grow a mustache.

So now even Hercule Poirot is getting a superhero-esque origin story. Or better yet, his mustache gets one. To be honest, it’s a fitting start to the brilliant detective’s story as his observational skill is nothing short of superhuman and Branagh, who let’s not forget directed Thor and included the Marvel hero in the aforementioned Belfast, loves seeing himself as the hero.

Death On the Nile, the followup to Branagh’s surprisingly enjoyable, if a tad dusty adaptation of Agatha Christie’s Murder On the Orient Express, finds the director having a bit more fun this time around. Plenty of liberties are taken with the source material, all with the express purpose of lightening things up. The battlefield prelude is one, the other finds Poirot hanging out at a swinging 1930s jazz club, where he manages to stumble into the film’s primary love triangle. the gorgeous, pristine heiress Linnet Ridgeway (Gal Gadot) has stunned the place just by walking in, all heads snapping to look at her. She’s just been introduced to Simon Doyle (Armie Hammer), fiance of her longtime friend Jacqueline de Bellefort (Emma Mackey). Linnet and Simon share a steamy introductory dance (although not as contemporary and raunchy as Simon and Jacqueline earlier), and six weeks later it’s those two who are instead engaged while Jacqueline is left a scorned woman.

Poirot finds himself on vacation in Egypt, where, after a balloon encounter with his layabout pal Bouc (Tom Bateman, the only other holdover from the prior film), he is invited on a pleasure cruise hosted by Linnet and Simon with their friends. Naturally, Jacqueline shows up, and soon there is a murder that everyone turns to Poirot to solve. You’d think at some point people would stop inviting him anywhere.

Everyone has a motive: Simon, naturally, who everyone sees as a kept man, a problem that also plagues Bouc; Jacqueline is an obvious suspect as she’s been stalking them for weeks. The star-studded cast also includes Sophie Okonedo as blue singer Salome Otterbourn, who flirts with the shy Poirot. Letitia Wright is her confident niece who shares a romance with Bouc, much to his mother’s (Annette Bening) disapproval. The reunion of comedy duo Jennifer Saunders and Dawn French is a treat even if their roles, Saunders as a formerly wealthy Communist and French as her nursemaid, are played pretty straight. There’s also a surprisingly reserved Russell Brand, almost unrecognizable, as a doctor and former lover of Linnet’s. Game of Thrones actress Rose Leslie plays Linnet’s maid, who may harbor secrets of her own. Ali Fazal plays Linnet’s cousin and business manager, someone nobody on the boat trusts.

All the star power in the world can’t disguise that elephant-sized Armie Hammer problem, though. The film was originally meant to open in 2020 but has hit numerous delays, mostly because of COVID-19 but not entirely. Hammer’s indiscretions have made him persona non grata, and there seem to have been serious thoughts about what to do about his part. But Simon is too important to simply cut or replace as has happened in some of Hammer’s other projects. That Simon turns out to be a scamp, an easily hateable one, only draws more attention to the Hammer scandal for those who care about it. I have a feeling most don’t. He still has very good chemistry with both Gadot, who is stunning and shot to look every bit the movie star that she is. But the real scene-stealer is Mackey as the devious, possibly psychotic Jacqueline, bringing an edge when the film gets lethargic. The first half screeches to a halt when she’s not around, as Branagh and returning screenwriter Michael Green move the players around like pieces on a chessboard. It takes quite a long time for the titular “death” to occur, but once it does the body count stacks up in a more brutal fashion than some may expect.

Visually, Haris Zambarloukos does stellar work as cinematographer, giving the film a prestigious, slick sheen reminiscent of old Hollywood. While the production didn’t take place in Egypt, the visual effects do a solid job of putting you there, with only occasional digital hiccups taking you out of the moment. Meanwhile, Patrick Doyle’s score is simply beautiful without being overbearing. With a mystery, it’s easy for the music to give away too much, but those who are unfamiliar with the source material will remain in the dark throughout.

Of course, these movies are always about Poirot and we see quite a lot of his personal side. Romances are teased, deaths hit him on a deeply personal level; this might not be the Poirot that Christie fans are used to, but Branagh has done a good job of making the legendary sleuth his own. Death On the Nile sometimes needs more steam behind it, but it’s once again worth booking passage on this pleasure cruise.

Death On the Nile opens on February 11th.