Last week’s episode of The Book of Boba Fett had a ton of surprises, returns, and more. It wasn’t a very good episode, if you ask me, coming across as more an exercise in fan service than telling an actual story. That said, it managed to introduce one of my favorite characters into the live-action Star Wars universe: Cad Bane.

There has been a lot of discussion about Cad Bane in my circle of friends. The popular gunslinging bounty hunter has been near unbeatable since debuting in Star Wars: The Clone Wars, and in his subsequent appearances in The Bad Batch, too unbeatable some say. And sure enough, in The Book of Boba Fett he’s seen gunning down Cob Vanth in a standoff to protect Freetown from the Pike Syndicate.

And in keeping with series tradition, Cad Bane gets his own character poster. He’s once again voiced by Corey Burton, and to me he looks pretty close to how he does in animated appearances. No, it’s not perfect but we all knew it was him immediately, didn’t we?

The season finale of The Book of Boba Fett airs this Wednesday, February 9th. Will Cad Bane have a role to play? The magic 8-ball says “Outlook Good.” 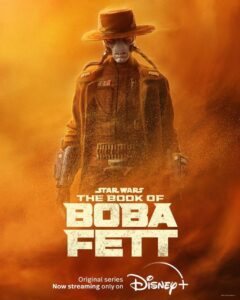