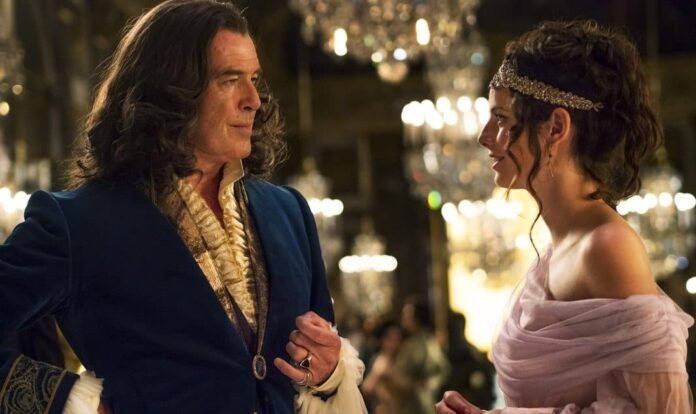 The King’s Daughter is based on Vonda N. McIntyre’s 1997 novel “The Moon and the Sun,” written by Vonda N. McIntyre. The film adaptation is done by Barry Berman, James Schamus, and directed by Sean McNamara. The film wrapped back in 2014 only to be shelved before finally being released nearly a decade later. A lot has changed in 8 years including the lives of cast members and in retrospect, given everything wrong with the film, should have stayed on the shelf. Pierce Brosnan takes on playing a French King whose body language pompously mirrors the unique mannerisms of Mick Jagger and has no idea of how to properly brush his hair (wig) away from his face. Fan Bingbing, who plays a heavily CGI’d mermaid, has had her life and career blown up by a tax evasion scandal since shooting wrapped but (as far as we know) has since got herself back on track. Pablo Schreiber has played more infamous roles since his appearance in the film. My personal favorite being Mad Sweeney (American Gods) who’s a belligerent Irish Sun God that’s after a special gold coin he accidentally gave away. Kaya Scodelario, who plays the king’s daughter, fell in love with co-star Benjamin Walker on the film’s set which is not all that surprising considering their onscreen chemistry. They have since married and had two children together.

It’s 1864 and we’re taken to the gorgeous but obviously more heavily CGI’d, royal French palace of Versailles. Pierce Brosnan portrays King Louis XIV and is determined to find the lost underwater city of Atlantis. The English accent, heavy make-up, and odd depiction of royalty is awkward and uncomfortable to watch as it feels nothing like 19th century France. After being shot and nearly killed by a peasant, the King (Brosnan) sides with his mad scientist Dr. Labarthe (Pablo Schreiber, Orange is the New Black, American Gods) on his suggestion to capture a mermaid and sacrifice her during a solar eclipse in hopes of acquiring immortality. This decision comes at the dismay of his priest and adviser Pere La Chaise (William Hurt) who believes that ALL life is a gift from God. A respectable ‘man of the cloth’ considering the time period and his position to the King, imo. King Louis XIV’s (Brosnan) quest for immortality leads him to capture a mermaid’s (Fan) life force, but his immovable will is challenged when his long-hidden illegitimate daughter,  Marie-Josephe (Scodelario) forms an unexpected bond. Once on the grounds of the glitzy chateau, the head-strong, water-loving Marie-Josephe hears the song of the captive mermaid who’s kept in an aquatic dungeon guarded by the handsome sea captain, Yves De La Croix (Benjamin Walker).Throughout the film, Marie-Josephe forms a bond with her new mer-friend, falls in love with the long haired sea captain, discovers her disappointing royal heritage, gets promised in marriage to a stuck-up duke (Ben Lloyd-Hughes) for financial gain, and sets out to save her new mer-friend; possible herself from captivity and death.

There is certainly a lot to pick apart when it comes to this particular film.  You would think after eight years, these issues could have been modified or corrected but were still intentionally overlooked. The only adjustment, according to my research, was the addition of Julie Andrews being brought in to narrorate this cluster fuck of nonsense. It’s 19th century France and literally everyone has an English or American accent..why? The costume designs are cute but feel more centered around something out of a 1980’s Vogue magazine. The King’s outfit resembles the velvet plush and ruffled look taken from the wardrobe of Purple Rain’s Prince and the women are dolled up to mirror looks from singer Madonna’s “Decade of Greed” era. The CGI is heavily riddled throughout this film and comes across as a thin hollow shell. It all feels like everyone is walking around on a half-built set in front of massive green screens. Versailles is clearly cut and pasted into the background and Fan’s mermaid looks like she belongs in a fully animated film as nothing about her feels realistic. For whatever reason, science has been significantly thrown under the bus, continuously mis-categorized, and rolled over repeatedly. The relationship between King Louis (Brosnan) and Marie-Josephe (Scodelario) is confusing and odd as it teeters on a fractured line of spousal grooming vs. forming a father/daughter bond. It’s fuckng wierd and uncomfortable. There are a few brief moments of goodness but The King’s Daughter is a highly forgettable, unfitting, unrealistic, and an inaccurate huffy puffy eye roll story of this film. One I do not recommend seeing.