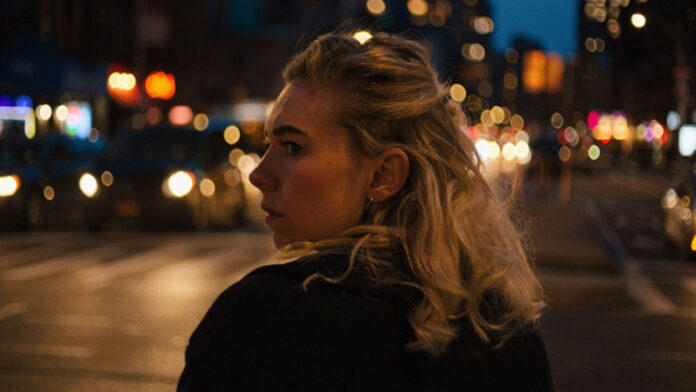 Although he’s only made three features in about a decade, the films of Adam Leon have been easily identifiable up to this point. 2012’s hip-hop backpacker film Gimme the Loot and 2016’s petty criminal love story Tramps are shaggy, rambunctious explorations of New York’s corners most people never get to see. They are also very plot forward and driven by the momentum of their freewheelin’ stars. There’s a little bit of that in Leon’s latest, Italian Studies, another Big Apple trek fronted by an impeccable performance, but its surreal, disorienting qualities suggest an intriguing shift for Leon.

Drawing and keeping your attention throughout is Vanessa Kirby, here playing amnesiac author Alina Reynolds, as she wanders the streets of Manhattan trying to piece together who she is. Alina isn’t sure what happened, and neither are we. Leon, especially in the early going, keeps us trapped in the same whirlwind of confusion. She can’t tell if these visions she’s seeing are memories, or if this city is a place she should know and the scads of people walking its streets her friends or complete strangers. That the streets are crowded at all should tell you something. The film immediately feels like it’s from another era, shot in segments between 2018-2019 pre-pandemic. But this isn’t a COVID story (thank goodness) but instantly a snapshot of the City and the way things once were and might never be again, similar to the question whether Alina will ever be who she once was.

Leon rarely gives us a clear idea what’s happening, using a variety of techniques to keep us off-balance. A beautiful haze lingers over some shots, others with the tinted light of stained glass, offering a dreamlike quality. Even the framing, with certain characters either out of focus or out of frame, leaves the viewer disquieted. Although incredibly effective, this does get tiresome after a while and it’s at that point when Leon confidently switches gears.

The second half of the film is considerably more driven than the first, with Alina gaining confidence and beginning to build a sense of self. Most of this is due to the energy of the young people she encounters and interviews loosely, having conversations about love, identity, parenting, and most importantly, connection.  Everyone in this film is looking for it, most of all the film’s real find, Simon Brickner, who has the combo of awkward adolescent and adult swagger that makes him instantly compelling. Simon approaches Alina at a hot dog shop with a dubious offer but they’re both so desperate for connection it’s a no-brainer she’ll say “yes” and that he needs her to say “yes.” He practically steals the film away from Kirby which is no small feat given how magnetic she is from start to finish. Also keep an eye out for brief appearances by Maya Hawke, a familiar famous face amongst a cast of non-professional young actors.

Deliberately tough to decipher but easy to let its unearthly haze wash over you, Italian Studies is another strong effort from Adam Leon and a mesmerizing turn from Vanessa Kirby. In a less effective filmmaker’s hands, I could see this slipping into an ambiguous experimental abyss but it becomes clear that Leon’s bewildering techniques were all part of the plan.

Italian Studies opens on January 14th in theaters and VOD.