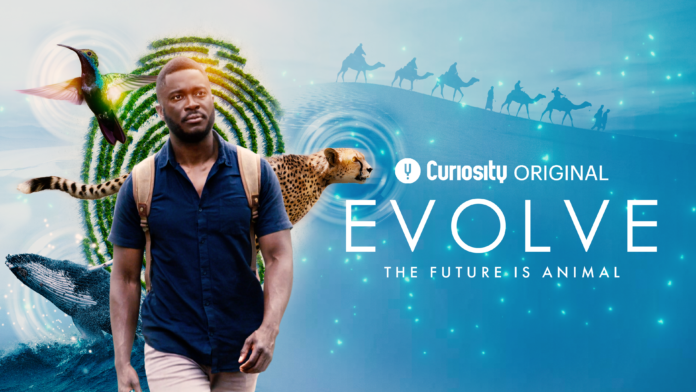 Evolve is the latest original and six part series to be featured on Curiosity Stream that explores how humanity is looking to solve many of its fundamental issues by “mimicking” the incredible innovations found in plants, animals, mammals, and all the cool things found in nature. Curiosity Stream is an American media company and subscription video streaming service that offers and caters to documentary programming. Enthusiasts, like me, can view a wide array of interesting documentaries that include films, series, and TV shows. It was launched in 2015 by the founder of the Discovery Channel, John S. Hendricks. Curiosity Stream’s headquarters is based right in my own home state of Silver Spring, Maryland. Biologist Patrick Aryee, who embodies an incredibly positive attitude and remarkable curiosity as he dives into discovering how nature can help us solve humanity’s biggest and rapidly approaching challenges.

Patrick Aryee is a biologist, wildlife TV presenter, and self-confessed thrill seeker who has always had a fascination with “how things work” within the world. He’s worked behind-the-scenes on several high-profile BBC productions including, Frozen Planet, Madagascar, and Attenborough: 60 Years in the Wild. Patrick is, without a doubt, a “guiding force” who can truly enrapture his audience as he travels to seek information and solutions from above, below, and around the globe. Patrick embarks on a high-octane adventure that can be viewed from the comfort of our homes and we can literally live vicariously through his daringly close and adrenaline inducing encounters. He and the show posses a Bill Nye the Science Guy quality and feel that, just like in my middle school days, sucks you in and feeds the desire to want to see more. Aryee has most recently produced and hosted the BBC World Service podcast ’30 Animals That Made Us Smarter’ — a bingeable journey into the ways in which human beings have learned from animals.

In this six part series, Evolve looks at key aspects of nature and how its precious species and resources can be mimicked, even adapted toward the lifeline and survival of sustainable life on and outside of our planet. Filming took place across four continents as each episode’s stories were shot throughout Namibia, Jordan, UK and in ten states across America- stretching from lush land and waters of Hawaii to Florida. Most notable for me is when Patrick visits the National Institute of Standards and Technology (episode 4) right here in Gaithersburg, MD which is only a 10 minute drive from where I live. Production took place over the course of approximately 12 months throughout 2021 and Principle photography totaled 15 weeks with several multinational crews. Evolve features dedicated biologists, scientists, engineers, intelligent and caring individuals who spent their careers, if not their lives, finding healthy and innovative ways in doing what nature and animals have done for thousands of years. Adapt or die. Each episode focuses on exploration, survival, cures, protection, movement, and restoration to what could be inspirational parallels of nature vs. the future of human evolution.

In the first episode, Patrick investigates how the natural world evolved and thrived in every corner of the planet. He dives into subjects pertaining to gravity-defying giraffes, radiation-resistant fungus, accelerated force and how that impacts humans traveling to space, to even briefly touching on cryogenics. A survival technique produced by Southern Brown Tree Frogs and can be found on every continent except Antarctica. Aryee poses questions and wonderment of how nature can teach us better ways of reaching and exploring its worlds within and beyond Planet Earth. Patrick goes on to explore in episode two, the single most important driver of evolution: survival. He is fortunate to witness insects and animals that have adapted over eons to endure our planet’s most extreme environments.

Desert Beetles found in Namibia have spent several thousands years adapting their bodies to become a tool for collecting water from dense fog produced by the rising sun. The nostrils of camels have also adapted to reduce the inhalation of sand and further acts as a cooling mechanism that allows them to survive the harshest of desert temperatures. These seemingly simple techniques are adopted by scientists and engineers across the world and are inspiring new technologies that could help humanity survive longer into the future. Patrick’s biomimicry quest continues as he investigates evolution’s regenerative secrets in episode three. For millennia, life has battled everything from injuries to infections. He tackles what could be the next major medical breakthroughs that are hiding in deadly scorpion venom and its impact on brain tumors and the delicate yet phenomenal skills of one of the earth’s longest surviving microbes, the Tardigrade.

The next three episodes in Evolve, Patrick goes in search of the animals that have mastered the art of protection. From invisible octopuses to invincible cockroaches, he meets the scientists learning from mother nature’s creatures to create more robotic technologies that could better protect us in the future. “Movement is Life” is one of the greatest quotes said by Brad Pitt in the film World War Z that I strongly live by. Others must feel the same as Patrick discovers new meaning and people to his love of travel and exploration as he discovers all the ways that life can move. The secrets to cleaner, faster, and farther travel are being uncovered in nature, not just for humans, but also for the robots we build to go where humans can’t.  Truly a fascinating episode. In his final adventure, Patrick investigates whether nature could hold the key to restoring the impact humans have had on planet Earth. From plastic pollution to ecosystem collapse, nature’s salvation could lie in the mysterious world of squid, decorative web building spiders, and awkward bumblebees.

If my love for science and documentaries isn’t as obvious as the nose on your face then it probably never will be. All joking aside: Patrick Aryee, the team behind this series, and all those who participated in regards to educating with further hope to inspire and unite us in this educational and incredibly informative quest are absolutely wonderful. Evolve is a fantastic series that really should screen in classrooms and televisions all across the world. Patrick is a joy to watch and I will highly recommend going the extra mile by subscribing to Curiosity Stream. They really do go above and beyond covering some of the coolest and unique documentaries for viewers like me to indulge in. I left some details out for viewers to discover themselves but it’s definitely worth it!