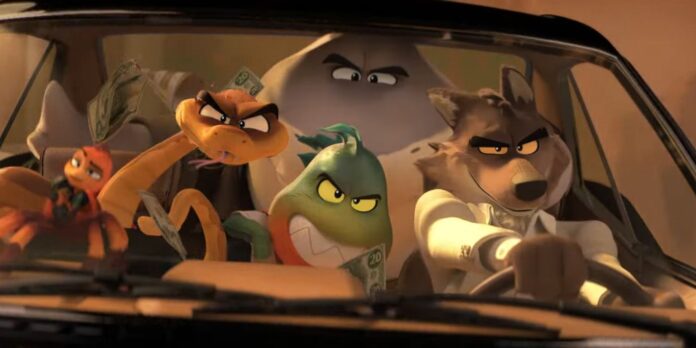 In the new film Sing 2, if there’s a bad guy in the movie it would the character Jimmy Crystal, who happens to be…a wolf. We just naturally assume that wolves are evil, going off the well-known moniker “Big Bad Wolf”, but the same goes for other creatures with negative reputations.  Well, in the new animated movie The Bad Guys, those stereotypes more than hold true, but it doesn’t mean a leopard can’t change its spots.

The Bad Guys features the voices of Sam Rockwell, Craig Robinson, Marc Maron, Anthony Ramos, Awkwafina, Zazie Beetz, Lilly Singh, and Alex Borstein, and centers on a group of animal criminals who basically become their own Suicide Squad.They’ll use their criminal talents as a force for good in order to stay out of prison.

Making his feature debut is director Pierre Perifel, an award-winning animator who previously worked over at Dreamworks.

Universal will release The Bad Guys into theaters on April 22nd.

Never have there been five friends as infamous as The Bad Guys—dashing pickpocket Mr. Wolf (Academy Award® winner Sam Rockwell, Three Billboards Outside Ebbing, Missouri), seen-it-all safecracker Mr. Snake (Marc Maron, GLOW), chill master-of-disguise Mr. Shark (Craig Robinson, Hot Tub Time Machine franchise), short-fused “muscle” Mr. Piranha (Anthony Ramos, In the Heights) and sharp-tongued expert hacker Ms. Tarantula (Awkwafina, Crazy Rich Asians), aka “Webs.” But when, after years of countless heists and being the world’s most-wanted villains, the gang is finally caught, Mr. Wolf brokers a deal (that he has no intention of keeping) to save them all from prison: The Bad Guys will go good. Under the tutelage of their mentor Professor Marmalade (Richard Ayoade, Paddington 2), an arrogant (but adorable!) guinea pig, The Bad Guys set out to fool the world that they’ve been transformed. Along the way, though, Mr. Wolf begins to suspect that doing good for real may give him what he’s always secretly longed for: acceptance. So when a new villain threatens the city, can Mr. Wolf persuade the rest of the gang to become … The Good Guys?