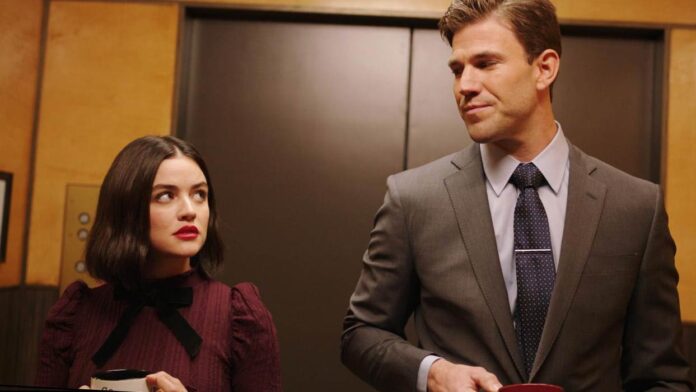 It’s a thin line between love and hate. Everyone knows that old chestnut, but does it also apply to workplace politics and office romance? That’s the question being asked in the rom-com The Hating Game, starring Riverdale‘s Lucy Hale.

Based on the Sally Thorne novel, The Hating Game stars Hale as Lucy Hatton, who is engaged in a professional rivalry with her workplace nemesis, played by Bridge of Spies actor Austin Stowell, while also falling in love with him.

The film is directed by Peter Hutchings in his first film since the 2018 Maisie Williams rom-com Then Came You. Also in the cast are Nicholas Baroudi and well-established screen veterans Corbin Bernsen, Gina Torres, and Sakina Jaffrey.

The Hating Game opens in select theaters and VOD on December 10th.

Based on the best-selling book, The Hating Game tells the story of ambitious good girl Lucy Hutton and her cold, efficient work nemesis, Joshua Templeton. Committed to achieving professional success without compromising her ethics, Lucy ultimately embarks on a ruthless game of one-upmanship against Josh, a rivalry that is increasingly complicated by her mounting attraction to him.