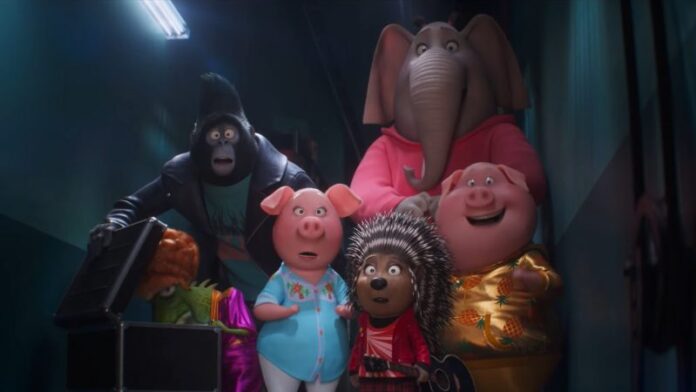 Illumination will probably always be known, for better or worse, as the Despicable Me folks who gave us those annoying/adorable Minions. But they have some real charmers under their belt, too, and one of those was 2016’s Sing, a film that surprised me with its crowd-pleasing jukebox musical spirit. I don’t normally think of myself as the type for underdog stories about singing anthropomorphic animals but that one won me over, and so did Sing 2…eventually.

If there’s something that I hate about sequels it’s the lazy storytelling trope that just does the exact same thing…except in Las Vegas. Sing 2 gets around that (slightly) by changing the location’s name to Redshore City, a glitzy showbiz town where Buster Moon (Matthew McConaughey) hopes to launch a bigger and flashier musical act than the rinky-dink dinner party show that kicks off the movie. To be fair, it’s quite a storybook-style spectacle, set to the tune of Prince classic “Let’s Go Crazy.” The number of characters and eye-catching pieces filling the screen is impressive, showing how Illumination has come visually.

But is this show enough to get what Buster wants? Which is to be a big-time production that warrants being on a much larger stage? Sing 2 gathers together much of the same cast playing the same diverse array of animal hopefuls: Scarlett Johansson returns as Ash the porcupine, who has gone on to bigger but not-so-better things. When Buster needs her help, she’s the first to answer the call. Taron Egerton returns as Johnny the gorilla, who gets a dance sequence in Buster’s new show but can’t master the moves until he pairs up with Lynx (Letitia Wright), a B-girl lynx with all the right steps. Reese Witherspoon once again voices Rosita, the momma pig who has basically achieved all the she wanted and more. When Buster makes a deal with shady wolf hotelier Jimmy Crystal (Bobby Cannavale) to launch a Vegas-sized act, he also agrees to replace Rosita with Jimmy’s Paris Hilton-esque daughter (Halsey). Meanwhile, Meena (Tori Kelly) the shy elephant has a crush on the ice cream shop guy (Pharrell Williams) but can’t work up any chemistry with her self-absorbed singing partner (Eric Andre).

All of the various storylines surround the central problems that Buster faces: he needs to lure rock legend Clay Calloway (Bono), a lion who has become a recluse, out of retirement others Jimmy Crystal will shut him down. And possibly eat him. Worse, the ridiculous sci-fi bonanza Buster is trying to pull off (think Jonathan Larson’s “Superbia”) is way beyond his grasp.

For a long stretch in Sing 2 these elements feel too separate and a bit random, when what makes these films enjoyable is how these characters play off one another. They actually don’t get to converse nearly enough, as new characters split them off into what amount to separate vignettes. The film didn’t actually take off for me until these subplots start to converge, as Clay Calloway learns to trust again and Buster remembers the people who brought him to the dance.

Once again returning as writer/director is Garth Jennings. Sometimes it’s hard to imagine this is the same guy who gave us The Hitchhiker’s Guide to the Galaxy and Son of Rambow. But what he has that connects both of those things with Sing is finding something unique and special in the quirks of each character. Sing 2 isn’t grasping for anything profound, it’s meant to be fun and uplifting and move these weird animal dreamers forward just a little bit more. And if it gets you to bop your head for a couple of hours to a string of pop hits, too, then Sing 2 has given a performance worthy of an encore.