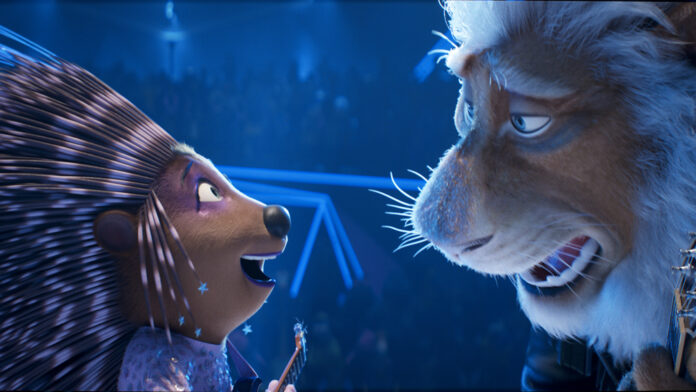 The dream for Illumination must be that you remember Sing 2 is a movie opening next month, because they’ve released yet another trailer even though we just had one. Although this one is supposedly the “final” look at the animated musical before it opens. I’ll believe it when I DON’T see it.

Matthew McConaughey returns as Buster Moon, with Reese Witherspoon as Rosita the housewife with a second shot at fame, Scarlett Johansson as Ash the prickly punk rock porcupine, Nick Kroll as Gunter the pig, Taron Egerton as Johnny the gorilla, and Tori Kelly as Meena. Bobby Cannavale voices gangster Jimmy Crystal, who helps them put on the show but at a risky price. Grammy winner Halsey plays his spoiled daughter, and there are other new characters voiced by Pharrell Williams, Letitia Wright, Eric André, and Chelsea Peretti.

Also lending his voice and a brand new song is U2’s Bono, who plays rock legend Clay Calloway, a reclusive lion who Buster needs to get his show off the ground. Call me crazy, but I think this king of the rock jungle is coming out of retirement.