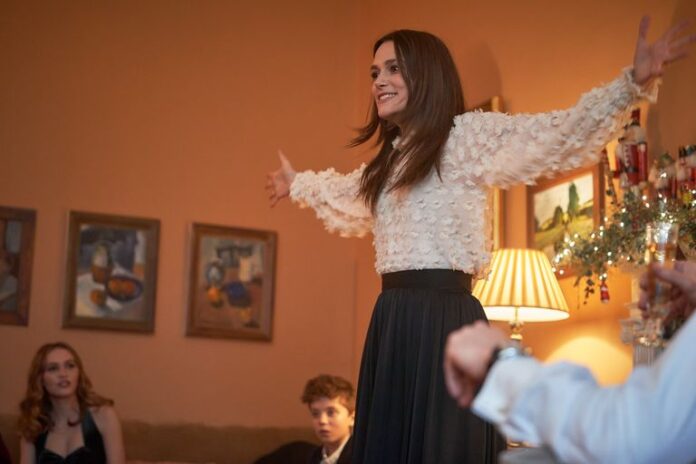 Who doesn’t love a good, cheery holiday movie? Well, me for one, and there are plenty of others out there like me who prefer their holiday fare with a bit of raunch ala Bad Santa, a bit of violence ala Die Hard, or in the case of Camille Griffin’s directorial debut Silent Night, a bit of apocalypse. This deliberate lump of coal has the benefit of featuring Keira Knightley, who starred in one of the ultimate happy Christmas movies in Love Actually, a choice that seems intentional when you unwrap its yuletide sentiments and find that all of the love, romance, joy, and friendship holiday movies peddle in are made into kindling by the film’s caustic sense of humor.

Deliberately vague in its description, Silent Night is definitely not your typical Christmas film. You wouldn’t know it from the opening, which finds Knightley’s Nell, her husband Simon, and oldest son Art (Jojo Rabbit‘s Roman Griffin Davis, the director’s son) furiously preparing for the evening’s festivities, including a big Christmas dinner for a houseful of longtime friends. And right away, it looks like we’ve wandered into Richard Curtis territory so much you begin to wonder when Emma Thompson and Alan Rickman will show up.

With talk of “forgiveness” in the air, and a splash of blood on the chopped carrots, something is definitely up here, but we assume it’s just the usual dysfunction that comes with holiday movies. Old romances flare up, misunderstandings bubble to the surface, and those who don’t quite fit into the group, like the argumentative Sophie or Sandra and Tony’s self-absorbed daughter Kitty (Davida McKenzie) are made to feel even more like square pegs. There’s a curious lack of subtlety to the barbs, and while the very-British humor is still fairly polite, there’s an edge that’s as bristly as an uninvited guest.

Without giving too much away, Silent Night soon strips off the gift wrap to expose what the giant Santa Claus in the room is all about. The holiday song “Last Christmas” has never had more appropriate a title, let’s leave it at that. There will be no more Christmas parties, no more stockings mounted over the chimney, no mistletoe, not after this one. The finality of it all causes some in the house to spiral badly, others choose to drink themselves into a stupor. The UK government has given everyone a pill that promises an easy, painless death rather than the other option. It’s the choice whether or not to take it that causes much of the movie’s most interesting conflicts.

Griffin, showing great poise as a filmmaker but also insight as a screenwriter, really digs into the different way that adults and kids handle their inevitable deaths. While there’s the airing of grievances and revealing of secrets, wrinkles emerge when one character is revealed to be pregnant and the oddest abortion debate ever springs up. But it’s the outspoken Art who lays it all out there in the way only a really smart, inquisitive kid could. He’s got an entire life ahead of him that he’ll never see and he’s not so willing to give up on it, and he doesn’t want his family to give up, either. At no point is Art treated like some naive little kid, he speaks to the adults on their level and that’s refreshing. Davis, who showed so much maturity in Jojo Rabbit, does so again in a cast full of some truly top-tier British talent. Also great is Knightley, who is playing the beautiful, frazzled woman we’ve seen her play in these types of movies so often, only now she has more of a reason to be on edge.

Sometimes the mix of humor and grim tidings feels a bit off, but even when that happens the acting is good enough to overlook it. Admittedly, I might feel closer to this because these folks are clearly children of the ’80s, my era, and I felt something in their wannabe-cheerful rendition of Irene Cara’s “Fame” and watching of E.T. as a final cinematic swansong. It got me thinking of the songs I’d wanna play and the movies I’d watch if my ticket was about to get punched. Most of the characters, all upper-crusty but not particularly snooty, tip-toe around the edge of being terrible but you end up liking them, anyway. They all do something that hurts someone else, intentionally or not, but it’s hard to hold a grudge. If there’s a major miscalcuation by Griffin it’s in the final scene, an unnecessary twist of the knife in a movie that had already long since made its point.

Silent Night isn’t a holiday movie that most families will want to sit around and watch on Christmas Eve with a cup of hot cocoa. But if you’re of a specific sort who doesn’t want to be coddled even at this time of year, this might be the cup of spiked egg nog you’re looking for.

Silent Night is available in theaters on December 3rd.