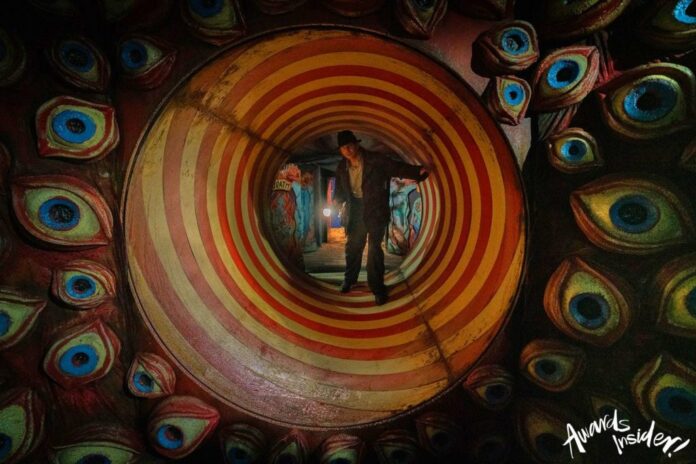 If there’s one thing we know about Guillermo Del Toro it’s that he knows how to craft a movie around the most terrifying of monsters. Horror is his stock and trade, although it would be unfair to say he’s a one-trick pony; his diversity knows no bounds. But the realm of evil is undoubtedly where his greatest strength lies, and to some unfamiliar with the original 1947 version of Nightmare Alley, his remake about a petty criminal, a rundown criminal, and a twisted psychiatrist may seem out-of-step for Del Toro. But just because there are no creatures that go bump in the night, Del Toro finds the most evil monster of all is humanity itself.

The previous version of Nightmare Alley is a film noir classic, unappreciated in its time until finding a new audience in the decades since. Like that one, Del Toro’s film centers on a con artist and murderer, Stan Carlisle, played by Bradley Cooper, who wanders from a haunted past and into a carnival of sideshow freaks. It’s there that Stan discovers a surreal world where who you were isn’t as important as who you pretend to be. Here, Stan is surrounded by others with their own secrets, their own grifts. He works his way into a job alongside the shady Clem Hoately (Willem Dafoe), who walks him through the show’s many horrors, only some of which are stewing in glass jars as freakish exhibits. When one of the acts, “The Geek”, gets out of his cage, Stan pursues him through what looks like a Del Toro fever dream, concluding with a mutated baby with an all-seeing eye that seems to peer through the grifter’s soul. The sheer beauty Del Toro is able to craft out of the nightmarish is simply astounding.

Stan is a natural con. His skill is worming his way into everyone’s routine, becoming whatever they need in that particular moment. He finds an easy lay in cheating mind reader Zeena (Toni Collette), while befriending her alcoholic husband Pete (David Strathairn) who mentors him on their exceptional grift. They teach Stan about their mentalist scheme, using verbal cues so that Zeena can appear to read minds and “see” unseen objects. It’s a massive success, but Pete warns that taking it too far, doing the “spooky show” as he calls it, in which you offer a mark hope by pretending to commune with the dead, can be dangerous. He also warns Stan against believing his own lies, that he can actually do the things he claims.

But isn’t believing your own lies part of what makes a great con? Even as Stan continually proves himself capable to the rest of this misfit carnival family, including the innocent Molly (Rooney Mara) who he begins a relationship with, it’s a question of whether he even knows if the feelings are genuine. Or has he spent so much time conning others that he no longer knows who he is?

Nightmare Alley‘s opulent production design continues even after Stan and Molly leave the carnival behind and all of its oddities and misshapen cast of outsiders, which includes Ron Perlman, Clifton Collins Jr., and more Del Toro favorites. But Del Toro finds even more shadows to lurk in while Stan finds success in the world of high-society, pulling off the same mentalist scheme he learned/stole(?) from Zeena and Pete. When Cate Blanchett’s beguiling psychiatrist Dr. Lilith Ritter enters their lives, Stan finds someone as devious as him, perhaps even more so. Together, they put together a plan to use the “spooky show” to rob blind her wealthy, powerful clients, swimming in shark-infested waters the likes of which Stan has never seen.

It’s clear that Del Toro loves the source material, and sees a chance to explore the dark and monstrous without having to veer into the supernatural. Film noir is a tough nut to crack. Many filmmaker play at trying to recreate that hard-boiled style but never can nail it. Del Toro, who let’s not forget has explored the Gothic with Crimson Peak and The Shape of Water, but also Japanese-influenced action with Pacific Rim, proves he can navigate this shadowy realm as well as anyone. Nightmare Alley is breathtaking to behold in some images, but especially during the carnival when Del Toro is free to run with his wicked imagination. Don’t let that deceive you into thinking the film gets bland as it moves to the big city. Arguably the film’s most arresting scene is set against a giant garden maze in the dead of night, where blood and snow mix ominously.

Cooper’s take on Stan is different than the one which made Tyrone Power a star decades ago. If there’s a major difference, it’s that Cooper’s version of Stan is always “on”, and there’s something more dangerous about him, as if he’s always a hair away from doing something nasty. Blanchett is solid, but I’d be lying if I said this was her best femme fatale-esque performance. Her body language is what speaks the loudest; watch the way she leans in and away from Cooper, asserting her dominance when necessary, feigning meekness when she needs to give in a little. The tete-a-tete between Stan and Lilith is delicious at times.

If I’m honest, I wonder what this film would’ve been if Dafoe had been cast as Stan. As Clem, he’s such a natural snake oil salesman, with a big toothy, evil smile that you’re surprised doesn’t hide a forked tongue. His words slide over you like oil, and you can easily believe why Clem is able to lure in so many “Geeks” into his deadly act.

At nearly 2 1/2 hours, Nightmare Alley overstays its welcome a bit, and I’m not convinced it has the previous film’s aggressive shock value. It could have done more to plumb the depths of these corrupted souls. But what Del Toro definitely has is a grasp on the dark majesty and the mystery of film noir, and when combined with his passion for the mystical and peculiar, it makes for a potent combination.