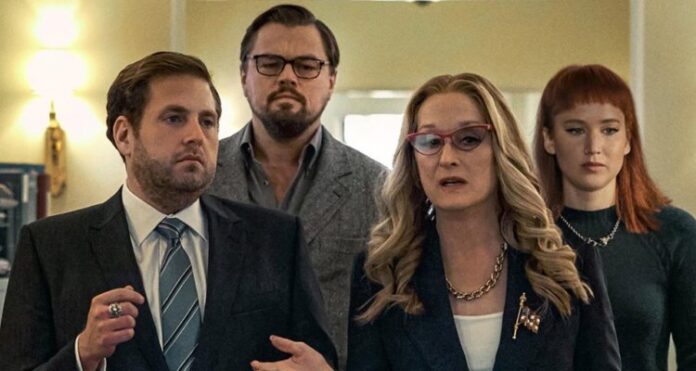 Perhaps no filmmaker has undergone quite the evolution as Adam McKay. From dim-witted but popular Will Ferrell comedies such as Anchorman, he started to transition with 2010’s The Other Guys, which took a buddy action-comedy vehicle and sprinkled in a message about economic inequality. That led to Oscar-winning films of a slightly higher brow such as The Big Short, Vice, and now Don’t Look Up. I say slightly, because even though these films are topical, educational, and message-heavy, they retain much of McKay’s lighthearted sense of humor. What’s that they say about a spoonful of sugar helping the medicine go down easier?

Don’t Look Up is a brilliantly conceived satire, one that, somehow, was written pre-pandemic. It’s pretty amazing considering how much it reflects our ideologically-divided reaction to COVID-19, but it fits just as well as an allegory for climate change, which is how it was intended. And to be sure, your mileage on this will definitely depend on which side of the aisile you fall on. McKay is unabashedly liberal and that comes through in his writing, but the goal seems to be to rich everyone by showing how ridiculous it is to choose sides when all of humanity is at stake.

The film starts off quickly as Jennifer Lawrence’s astronomy PhD student Kate Dibiasky makes a groundbreaking discovery. She’s found a comet hurtling directly towards Earth, and given its size, when it makes impact that’ll be all she wrote. Extinction-level stuff. Leonardo DiCaprio plays her professor, Dr. Randall Mindy, who goes completely unhinged when he sees it, too. So what are they to do? The only thing they can do. Call NASA, who give them a blase “Let’s not get dramatic here,” response.

But it gets worse once they are actually invited to the White House, where Trump-esque President Orlean (Meryl Streep) and her Donald Jr.-like son Jason (Jonah Hill) not only leave them waiting for hours, but barely listen to them at all. McKay’s targets are perfect here as he tears into politicians who’d rather score political points than, y’know, save the whole world. You’d think being the savior of humanity would earn you some points, right? But not everyone sees it that way.

McKay goes a bit off the mark, and very nearly enters into smug territory as Kate and Randall take their message to the media, only to be rebuffed because they aren’t good on TV. Ariana Grande and Kid Cudi star as a celebrity couple whose on again/off again relationship is a national distraction from the comet that will destroy everything. Kate’s freakout becomes a meme, Randall gets obsessed with his own celebrity and starts cheating on his wife with the co-host (Cate Blanchett) of a Morning Joe-esque program. As McKay lampoons what would seem to be his own audience, he comes perilously close to alienating them, as well.

The skewering of media and political culture isn’t especially nuanced, but McKay isn’t aiming for subtlety here. He’s clearly frustrated and angry and Don’t Look Up is his expression of that anger. I’ll take the passion he brings to this than some of the other milquetoast crap out there that we’ve seen, especially from films that claim to be “about the pandemic” but aren’t really about anything at all.

DiCaprio’s well-known climate change activism makes him the perfect choice to play Randall, as he’s able to poke fun at it and his own celebrity. He’s much nerdier here than we’ve ever seen him, but earnest throughout even as Randall starts reading his own press clippings. It’s a necessary facet as the film veers towards its conclusion, with McKay pressing the sincerity button furiously. If we don’t believe these characters truly did everything in their power to prevent this disaster, then none of it would matter.

Lawrence is even better, though. As the cynical one of the pair, Lawrence gets the best deadpan lines and some terrific line delivery. She even manages to have pretty good chemistry with Timothee Chalamet, who is a surprising breath of comic fresh air as a disaffected skater with interesting levels of depth.  Rob Morgan, who at this point is Netflix’s secret weapon he does so much for the streamer, has a great role as Dr. Oglethorpe, who is as incredulous as Kate and Randall over the world’s reaction to the news. Grande, playing an extreme version of herself, delivers such an ingenious, knowingly absurd performance of the song “Just Look Up” (named because half the population stubbornly refuses to look up and see the comet coming) that it demands to be performed at next year’s Oscars.

It’s inevitable that Don’t Look Up will be divisive. I can see the reviews already with those saying this is the wrong movie at the wrong time because we’re already polarized enough in this country. Yeah well, trust me, that’s not going to change whether this movie exists or not, and I’d rather have it here to make light of what we have sadly become. If this is Adam McKay’s lot in life, to be a truth-teller through the use of movies as funny as Don’t Look Up, then I’m okay with that.

Don’t Look Up opens in select theaters on December 10th, followed by Netflix on December 24th.

Cinema Royale: Is ‘Spider-Man: No Way Home’ The Best Spidey Movie Ever?