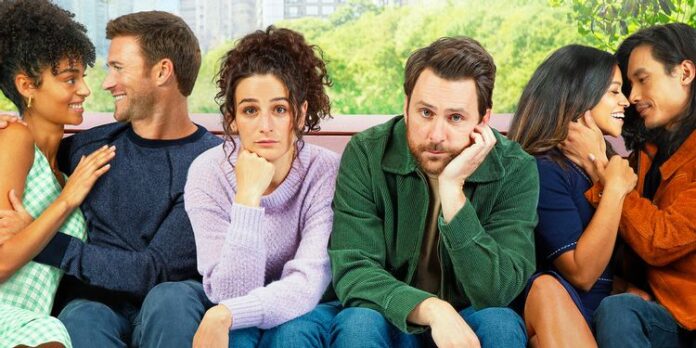 There’s absolutely nothing that will surprise you in the new trailer for Amazon Studio’s rom-com, I Want You Back. Not the music, which features a version of the Jackson 5 single from which the title is named. And now the premise, which finds Jenny Slate and Charlie Day who bond over their plan to sabotage their exes’ new relationships. If you guess that Slate and Day’s characters will probably fall in love along the way, you get a prize!

So yeah, that’s the idea behind the film. Slate, who deserves better stuff than this, and Day play recently-dumped strangers who can’t get over their past loves. So after becoming one another’s support system, they decide to win back their exes by destroying any hope they have of love. Gee, why wouldn’t we want to root for these two that they’ll find happiness someday?

Gina Rodriguez and Scott Eastwood play the former lovers, with The Good Place‘s Manny Jacinto and Letterkenny’s Clark Backo as the new flames.

The film has direction by Jason Orley, who really surprised with the Pete Davidson comedy Big Time Adolescence. On the script are Love, Simon writers Isaac Aptaker and Elizabeth Berger.

DC Readers: Attend A Free Early Screening Of ‘I Want You Back’