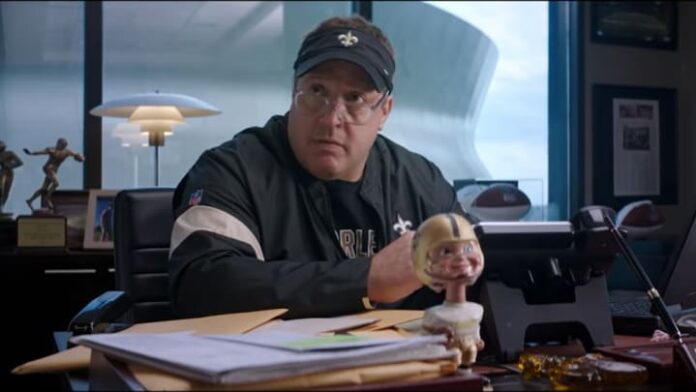 It pays to be good friends with Adam Sandler. His exclusive deal with Netflix has seen a bunch of his pals reap the benefits with movies of their own, all produced by Sandler, of course. And that’s what has led us to Home Team, a family-friendly sports comedy with a real-life twist to it: star Kevin James is actually playing New Orleans Saints head coach, Sean Payton.

Remember that year Sean Payton was suspended from the NFL as a result of the bounty scandal? Well, Home Team is about that year Payton was away, time he spent reconnecting with his son by coaching his Pop Warner football team.  Joining James in the cast are Taylor Lautner, who worked with Sandler on Grown Ups 2 and Ridiculous 6, plus Isaiah Mustafa, Rob Schneider, and more.

Payton actually approved the script himself and makes a cameo. The film is directed by Charles Kinnane and Daniel Kinnane.

Home Team hits Netflix on January 28th 2022. It looks awful, and James about the worst representation of Payton as possible. But if Payton digs it, who are we to complain?