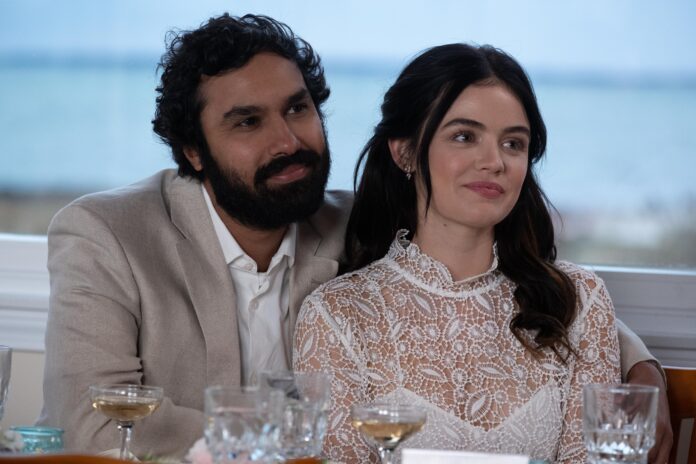 The Storied Life of A.J. Fikry is aptly titled. The new film follows the titular bookseller throughout his life from a depressed border-alcoholic widower to a married dad. It’s the sappy everyday-life epic that made the big bucks in the late 90s and early 2000s. Full of contrived scenarios that make it more of a soap opera than the life-changing film experience it wants to be.

It makes sense that a movie about a bookseller would be based on a beloved novel. Published in 2015, author Gabrielle Zavin gained acclaim for her sweeping story about the fragility of life and a man given a second chance. While sentimentality works on paper, onscreen the concept is corny. The Big Bang Theory’s Kunal Nayyar plays the titular A.J. Fikry, who is left depressed and grumpy after the death of his wife. Refusing to connect with the world, including a young publish rep (Lucy Hale), he decides to drink himself away when his copy of Tamerlane, a valuable short story collection by Edgar Allen Poe, is stolen. This sets off a chain of events that don’t feel connected initially. Instead, it feels like we are experiencing small chapters of A.J.’s life.

We see him adopt a small black girl after her mother kills herself at the local beach. He becomes open to being a dad and eventually pursues Hale’s character. We see his friend and local cop (David Arquette) become a reader and his former sister-in-law (Christina Hendricks) grow more frustrated with her failing marriage.

Not only corny, The Storied Life of A.J. Fikry is dated and full of cliches. A young Black mother dies by suicide after leaving her child with “good people”. A car crash kills an adulterer, and cancer makes an appearance. The twinkly horn-laced soundtrack is reminiscent of 90s Hallmark music, just obnoxious enough to take you away from the trite dialogue. The script is eye-roll-inducing and way too long. Its 105-minute runtime feels like 3 hours.  The characters don’t talk like real people, and despite Hale, Nayyar and Hendrick’s best efforts, the delivery feels choppy.

The Storied Life of A.J. Fikry is in theaters. Watch the trailer below.