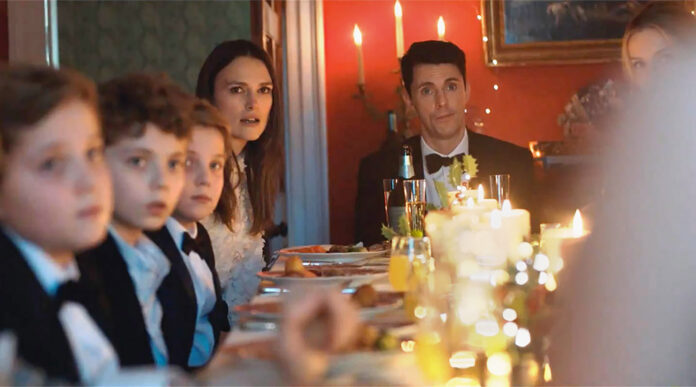 Keira Knightley starred in one of the most beloved Christmas rom-coms ever in Love, Actually, a film that will be an annual favorite probably for the rest of time. But she’s going for a different kind of holiday spirit with Silent Night, which sees her in another ensemble of terrific British thespians. Just don’t go in expecting any cheesy declarations of love.

Silent Night stars Knightley alongside Matthew Goode, Jojo Rabbit‘s Roman Griffin Davis, Lucy Punch, Lily-Rose Depp, Kirby Howell-Baptiste, Sope Dirisu, Rufus Jones, and Annabelle Wallis. Knightley and Goode play a married couple who along with their son invite a group of friends to their home in the English countryside, and while things seem to be full of merry holiday cheer, outside the world is doomed and this is probably going to be the last Christmas they ever share. Kinda puts a damper on things.

The film marks writer Camille Griffin’s directorial debut, with Kingsman‘s Matthew Vaughn on board as producer. Camille also happens to be Roman’s mother, which should have made for some interesting moments on set.

Silent Night opens December 3rd in theaters and on AMC+. It premiered in September at the Toronto International Film Festival to really strong buzz that could carry it through the holidays.

Silent Night follows parents Nell (Knightley) and Simon (Goode) who have invited their closest friends to join their family for Christmas dinner at their idyllic home in the English countryside. As the group comes together, it feels like old times – but behind all of the laughter and merriment, something is not quite right. The world outside is facing impending doom, and no amount of gifts, games or Prosecco can make mankind’s imminent destruction go away. Surviving the holidays just got a lot more complicated.