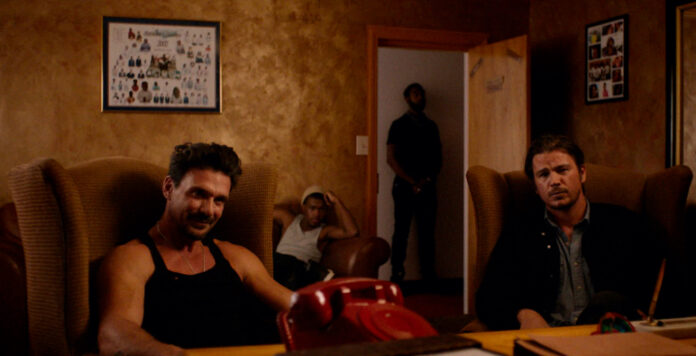 Ida Red is quite the cracking little crime thriller, the latest from Tulsa, Oklahoma’s own writer/director John Swab. In Swab’s second film of the year following the drug industry drama Body Brokers, a tangled family dynamic of lowlifes and criminals take orders from the titular family matriarch (Melissa Leo) even though she’s been locked up for fifteen years. Heists get pulled, the body count gets stacked up, people get double-crossed, and a long-held secret nearly destroys everything. This is the closest thing to Animal Kingdom that I’ve seen since, well, Animal Kingdom, and is worth having on your radar.

Swab smartly reunites with two key cogs of his Body Brokers cast; Oscar-nominee Leo and the always-great, always-intimidating Frank Grillo. The latter plays family psychopath Dallas Walker, Ida’s brother and the one they call on when things need to get bloody. Josh Hartnett plays the “golden child”, Wyatt Walker, who gets into the family business because “it’s in our blood.”  But not so for his sister, Jeanie (Deborah Ann Woll), who has married good-guy cop Bodie (played by rapper Slaine in a real turn for him), which puts her in an awkward position. There’s also her rebellious daughter Darla (Sofia Hublitz), who has problems of her own just being a teen. It doesn’t help that she looks up to Wyatt more than she does her own parents.

A connection to Swab’s earlier film is made in the opening scene, as a truck full of drugs is hijacked by the Walker clan and a couple of hired goons. Swab’s direction here is a bit too dark for its own good; you can see the kind of mood he’s setting in this grimy town. But it also makes it difficult to tell who is doing what, and when shots start getting fired it’s hard to see who is doing the shooting and who is doing the dying. Soon after, Wyatt pays a visit to his incarcerated mom, who already knows that the job went south and needs to be cleaned up. But there’s more; she’s sick and doesn’t want to spend her last days behind bars. Wyatt makes it his mission to make sure she won’t.

A big part of Ida Red is in exploring the duality in Wyatt’s life. He seems like a decent enough guy; a businessman and someone who takes time out to spend with his family. But the guy has a rap sheet a mile long, and his charming personality hides the dangerous criminal underneath. At heart he’s just a momma’s boy. Dallas, on the other hand, is terrifying. Grillo has always been an imposing guy. He looks like he has taken his share of punches and dished out even more. As an unhinged psycho he’s off the damn chain. In one skin-crawling scene he blows the brains out of the brother of one of the truck hijackers, then seductively taunts the girlfriend of the other (Beau Knapp) to the sound of “Promises Promises”, before killing her, too. Some of Swab’s musical choices are weird as Hell, like a suicide set to Madonna’s “Crazy For You”. The incongruence is perplexing but also keeps Ida Red from being as dull as so many of these grim, low-budget crime flicks tend to be.

While the script is riddled with cliches, the cast makes the most of them, producing a number of really excellent performances. I really dig Hartnett more as he’s moved away from the A-list spotlight. He’s learned to use his boyish good looks to play devious, sinister characters and is quite good at it now. Leo doesn’t get as much to do as she’s talking through a prison phone most of the time, but her hopeful presence weighs heavy enough that a final act appeal to the parole board tugs at the heartstrings even though you know Ida doesn’t deserve our sympathy. It’s a strong reminder that Leo is an Oscar-nominated actress who can really bring it with the right material. She deserves more. But the real stand out for me was William Forsythe, who swaggers into the film as FBI agent Lawrence Twilley. Playing to every Texas Ranger stereotype he can find, Forsythe speaks little but offers a bold contrast to Slaine who is more reserved, more serious, than the boisterous street lyricist has ever been before. Those unfamiliar with Slaine’s screen work will recall him as heavies in Gone Baby Gone, Killing Them Softly, and The Town. He’s nothing like those characters here. I had to check and make sure it was him.

For all of the great character work being done, Ida Red suffers from a script that is either incoherent or just plain sloppy. To say the Walker family’s various relationships are knotty would be an understatement, but a major plot twist about Darla and Jeanie  comes out of nowhere then just lays there, leaving us stumped. Why did that particular swerve need to be part of this movie?  Swab occasionally favors exposition dumps to try and smooth out the screenplay’s rough patches, but at other times he’s far too vague. When the major motivating force behind Wyatt’s actions is resolved after just a brief, hushed conversation it makes one wonder what the Hell the entire movie was for. Even so, Swab misses the opportunity for a perfect getaway chase send-off with a couple of extra scenes too many.

There’s no need to reinvent the wheel when the entire cast is this good and the tension at such a high level. With a movie like this you don’t go in expecting originality, just for it to be exciting, and Ida Red definitely grabs you along for a crazy ride through the Oklahoma underbelly.

Ida Red opens in theaters and VOD on November 5th.